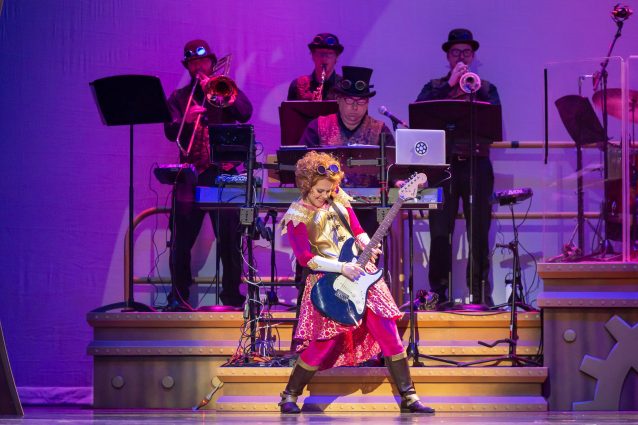 I like a good fairy tale as much as the next person, but princess stories have always made me uncomfortable. The princesses I grew up watching were praised for their meekness, their physical beauty, their…

I like a good fairy tale as much as the next person, but princess stories have always made me uncomfortable. The princesses I grew up watching were praised for their meekness, their physical beauty, their complete and utter lack of personality or agency, and their ultimate betrothal to some eligible royal bachelor who surpasses them in physical strength but matches them in lack of inspiration. Even as a kid, I found the concept to be insulting and depressing.

So when I walked into the Taft Theater on Saturday, hand-in-hand with my date — my boyfriend’s 8-year-old son, whom I love to pieces — I have to admit that I was a little nervous. I’d heard great things about The Children’s Theater of Cincinnati and their conscious interpretations of age-old narratives, but the idea of sitting through a play exclusively about princesses was a bit daunting. When I was a kid, I was lucky to have a family who cultivated qualities like independent thinking and self-reliance, and now that I’m an adult, I want to impart the same values on the kids I care for.

The stage was set with an ornate steampunk border (steampunk seems to be all the rage with kids these days, right?) complete with turning gears, tall LED columns, and mechanized bursts of “steam.” This was especially great, as I returned to the Taft Theater on Saturday night to see Patton Oswalt perform, who was perfectly delighted to laze on the steps and command bursts of fog from the stage crew, and we were delighted in return. Delight for everyone!

At the start of the show, the audience was led through a brief welcoming and informational session, geared especially toward children who were new to experiencing live theater, gently instructing them to observe with their eyes and ears but to sit still (as still as a small child can sit) and to not talk, except to laugh as loud as they want to when they think something is funny. You’d best believe that there’s a lot of adorable pint-sized laughter at a Children’s Theater show.

The royal kingdom in which The Children’s Theater of Cincinnati’s “Sleeping Beauty” is set is a hyper-modern kingdom of olden times (see also: steampunk). There are a lot of genuinely funny jokes geared toward adults and kids, including the king giving out “Facebooks,” heavy leather bound books, for everyone in the kingdom, despite the king admitting that he doesn’t understand what “Facebook” was. I’m a sucker for a good goof, and that got a big laugh out of me.

TCT decided to go all in on the princess narrative with this one. This self-aware rendition of “Sleeping Beauty” features not one, but six classic princesses, who affectionately refer to one another as “sisters.” Princess Aurora, played by Jenna Vanweelden, prefers to go by “Rory,” and is a bit of a firebrand. While all of her sisters were studying etiquette and tradition, she was playing electric guitar and kicking a soccer ball. When her sisters all dutifully began courtships with princes, she talked to her prince about physics, astronomy, and philosophy.

A beautiful thing about TCT is their commitment to productions that are just long enough for a child to sit through before they lose their mind (roughly 60 minutes). In this case, that amounted to a heavy dose of exposition and character development (read: what was sorely lacking from every princess fairy tale I was privy to in my formative years) and a plot that is resolved VERY quickly, which is much more satisfying than I ever would have imagined.

The story resolves itself with a procession of the six wedding-veil-wearing princesses with their assigned princes (procured earlier in the play through some nonchalant frog-kissing), and a proclamation from the King that “all good stories end in a royal wedding.” Defiant Rory speaks up, explaining that while the princesses may marry these princes one day, it was more important for them to take some time to stand on their own feet together as sisters — and I’ll tell you what, that moment sold me on The Children’s Theater of Cincinnati forever. I’ll take a princess with some agency.

After the show, I asked my boyfriend’s son what he thought, and he said, “I liked it!” When I asked if anything stuck out to him in particular about the story, he said no. Of course, this could be due to his eight year old mind wandering during the course of the show, or the chronic condition of children to resist giving detailed answers to questions from adults. But it could also be that his generation is seeing more and more narratives like this, and that adults, like the ones in The Children’s Theater of Cincinnati, are doing it right.