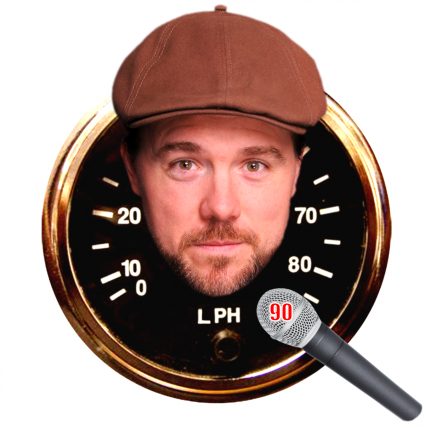 Paul Strickland has a unique skill set that could serve him well as a con artist, cult leader, attorney or politician. Lucky for us, he chooses to use his powers for good, rather than evil.…

Paul Strickland has a unique skill set that could serve him well as a con artist, cult leader, attorney or politician. Lucky for us, he chooses to use his powers for good, rather than evil. He’s adept at spinning lies. Instead of using that skill for personal gain at the expense of others, he chooses to make art. As Picasso allegedly said, “Art is a lie that makes us realize truth.” Strickland has evidently taken that philosophy to heart. And this show has so much heart.

“90 Lies an Hour” is written and performed by Paul Strickland and directed by his partner, the other half of Theatre Mobile, Erika Kate MacDonald. The pair are a familiar staple in Cincinnati’s theater scene, especially around Fringe and Know Theatre. This particular production is a collection of three absurd stories and a song, which Strickland attributes to his “Ain’t True and Uncle False.” True and False live in “Big Fib Cul-de-sac, a small trailer park just off the coast of Factual.”

The first story involves how True and False met. It involves a car that runs half on curse words, which became derelict — and therefore a de facto playground — after its owner found religion and swore off swearing. The second story is a eulogy for a citizen of Big Fib, which Paul was asked to write because he didn’t know the man and would therefore be “unbiased.” The third is a four-chapter, epic yarn about a town that built a glass-bottomed boat and a city under a lake to go with it — and the people whose lives were changed by it.

The stories are hilarious and absurd. In some ways, the entire premise of the show is absurd. But it’s also one of the purest forms of community. It’s a man standing up to tell stories and sing a few songs. Nothing more. But Paul Strickland is a near-peerless storyteller. Even when you know he made most of it up, he speaks with such sincerity, such conviction, that even as you laugh you feel compelled to take it all seriously.

That’s not to say he’s deceiving you. At the heart of every ridiculous yarn is a kernel of truth — about innocence, youth, love, grief. In one case, it’s about finding truth itself in a literal lake of lies. There’s no better metaphor for “90 Lies an Hour” itself and Strickland included it in the show.

“90 Lies an Hour” is an absolute must-see for this year’s Cincy Fringe Festival. Make sure it’s on your list.