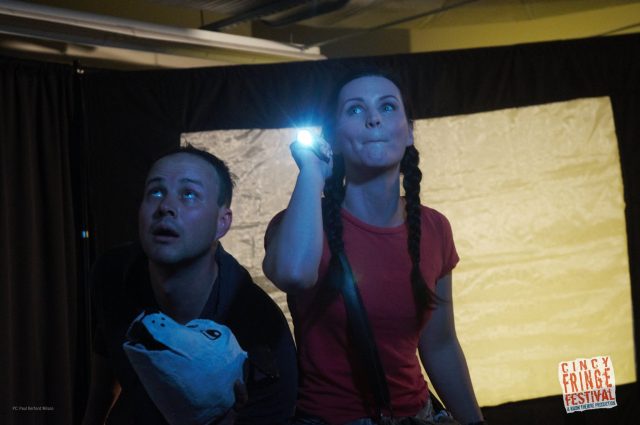 There's a peculiar tradition in young adult fiction — the tradition of the independent, plucky young child detective. You can see it in "Nancy Drew," "The Hardy Boys," "Scooby Doo" and "Veronica Mars," among others.…

There’s a peculiar tradition in young adult fiction — the tradition of the independent, plucky young child detective. You can see it in “Nancy Drew,” “The Hardy Boys,” “Scooby Doo” and “Veronica Mars,” among others. And during Cincinnati Fringe Festival, you can see it in “ZOINKS!”

“ZOINKS!” is a production of Queen City Flash, starring Jordan Trovillion as 14-year old teen sleuth girl detective Nolan Blackwell and Trey Tatum as her semi-intelligent dog, Casper. The inseparable pair have a nose for adventure and justice. They’re drawn to haunted houses, abandoned factories and deep, dark woods. They won’t stand for unanswered — or unasked — questions. In fact, when the story begins, they act as audience surrogates to ask a few big ones about Nolan herself. Chief among them: “Where the f*** are your parents?!”

A slow drip of information throughout the show answers that one. “ZOINKS!” is riotously funny, but it doesn’t shy away from stark realism. What we learn about Nolan, Casper and the origin of their relationship with one another is nothing short of heart-wrenching. But it’s not overpowering. The tragic elements of the story are used sparingly, hidden among a mountain of laugh-out-loud moments like a a sprig of broccoli that’s been deep-fried and dipped in cream cheese. The effect is delicious.

Nolan and Casper, exploring a new neighborhood, stumble upon a genuine conspiracy mystery revolving around a creepy undertaker and a house that ticks so many of the “Haunted House” prerequisite boxes that Nolan is positively euphoric when she sees it. For a world like this to feel properly alive, it needs to be peopled. A major obstacle to that need: there are only two performers. So, the audience plays an integral role. Two key characters are portrayed by audience members, including the main villain — those who attended the first performance were lucky enough to see this role filled by Joe Mock, known to the Fringe community as “Papa Fringe.”

As Nolan and Casper navigate the neighborhood, they hold a flashlight and notepad to feed lines to at least half of the members of the audience. It’s a gimmick Trovillion and Tatum execute with incredible comedic precision. The pair are expert performers, blending a tight, well-planned script with sharp improvisation throughout.

With note-perfect comedy, a cheeky send-up of the caper genre and a sincere tenderness at its core, “ZOINKS!” is more than worth your time. Don’t miss it.