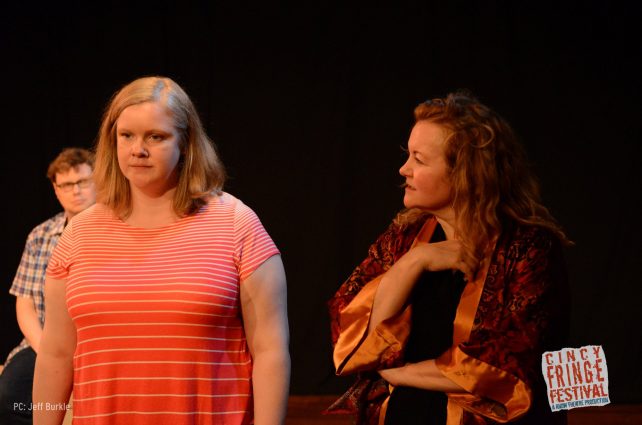 This House Will Never Let Us Go - Jeff Burkle

Let me start by saying this: I went through so many emotions watching this play, I had to sit in my car and collect my thoughts before driving off. Within the first 15 minutes, I…

Let me start by saying this: I went through so many emotions watching this play, I had to sit in my car and collect my thoughts before driving off. Within the first 15 minutes, I said to myself, this could be a cool 90-minute Netflix comedy. By the end, I interpreted this as how people feel when they don’t have a passion in life. When there is nothing for them to hold on to. This is how people die. “This House Will Never Let Us Go” is a comedic, three-person play with many interpretations. The actors laugh, curse, tell crude jokes and shed light on sacrifice you would’ve normally think of.

After Joan breaks up with her boyfriend Griffin, she feels she has no place in this world. She doesn’t have a good relationship with her family and doesn’t have any friends, besides her now ex. So, each weekend, she starts her night by going to random parties, finding a group of drunks to mingle alongside. When they finally ask her who she is, she shares her sad breakup story in hopes a total stranger will offer up their couch.

Joan likes this. She doesn’t have to fully commit or be tied to anything. She keeps her life open for possibilities, knowing she is not going to take any of them. Although she is envious of people who have homes to go to every night, she feeds on her own sadness. She eats off her own emptiness. For a year, this has been working. She keeps her laptop by her side for work-from-home gigs and sleeps on whatever couch, bed, sofa she can find. One day she gets an email from an old boss to stay at her New Jersey beach front home, only a three-hour train ride from where she currently is. When she arrives, she is greeted by a spooky guest. One who doesn’t quite like the sunlight.

While living with the ominous roommate, she invites her ex-boyfriend Griffin to come and stay on the weekends. A friends-with-moderate-benefits relationship. Griffin knows he is a horrible boyfriend and is perfectly fine with that. That is actually his 30-second elevator speech — what you see is what you get.

Griffin soon offers her a gig he believes she can’t refuse. He wants to be roommates with benefits. They would live together, sleep together, feed off each other’s loneliness and do the bare minimum in life until global warning strikes or unvaccinated kids take over the world.

Here, is where you must pay attention. Without giving a spoiler alert of what she really is, the eerie houseguest, Iris survives by sucking blood from her visitors. No, she is not a vampire. When she is hungry, she simply begins a conversation, holds their hand and begins to suck their blood. While she slowly drains the life from their bodies, Joan and Griffin are in trance. They can’t feel what is actually happening. This has always worked for Iris. She drains her prey day by day, until she is ready to kill. Ready to satisfy her urge.

Even though Iris does this to both Joan and Griffin, for some reason Joan begins to feel her. She feels her teeth sinking into her skin, the pull of fluid leaving her body. It hurts, but she allows it to happen.

Confused as to why Joan can feel her, Iris scolds her. Iris tells Joan she is already living a non-existent life because she refuses to be attached to any living entity. She doesn’t want friends. She doesn’t strive for a home of her own or a decent job to make money. She has no passion, no hobbies. Joan has nothing.

After college, I knew people like this. They never wanted anything of their own. Feeling connected to anyone was a fear for them. They would act so happy but once the conversation ended you could see the turmoil and hurt in their eyes. But they never wanted to change. It was the only emotion they believed their heart could feel.

Well, who knew criticism from a blood sucking creature with blonde hair would make Joan want to live? Wanting another chance at life, Joan offers Iris an ultimatum. If she agrees to let her go, she will gift her Griffin. Joan is willing to sacrifice her basic ex-boyfriend for another chance at life. Another chance to feel the heat from the sun and breathe in ocean air.

It made me think, what I am willing to sacrifice to reconnect with myself? To appreciate the small things? To simply be happy to be alive? I’m not saying it has to be another human being, but so many times we are busy just existing, we have no clue what path we’re own ad where it is taking us.

I encourage everyone to see this play. Yes, it is weird. Yes, there are a lot of sex jokes. And yes, it makes you think. What is the ultimate sacrifice you will make, to keep your own life?

Marissa Staples is a Cincinnati published author and writer for The Voice of Black Cincinnati. She developed her love of arts from her mother, Kandi. Being a native of Cincinnati, she loves to travel. If she is not traveling, you can find her reading, writing, volunteering or drinking wine. Wine always brings smiles, friends and creative dialogue.