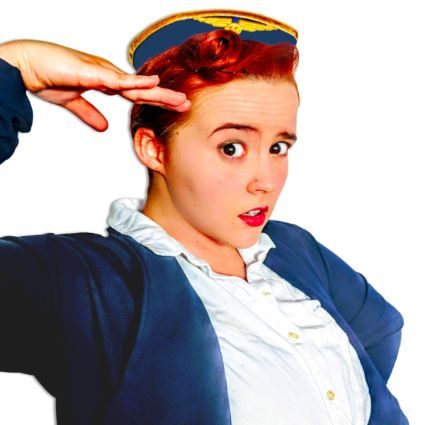 'Stow Your Baggage' is quite a ride

There's not a lot you can do to make a small classroom in the Art Academy of Cincinnati look like an airplane cabin. That doesn't stop Alexx Rouse. Impeccably dressed, with pristine makeup, Rouse is…

There’s not a lot you can do to make a small classroom in the Art Academy of Cincinnati look like an airplane cabin. That doesn’t stop Alexx Rouse. Impeccably dressed, with pristine makeup, Rouse is the spitting image of a flight attendant. She greets every member of the audience as they come in, gently reminding them that, as passengers, they’ll have to place their bags securely beneath their seat. During the curtain speech, she remains seated with perfect posture, wide eyes and an insistent smile. When “Stow Your Baggage” begins, she awaits the captain’s voice over, then takes over as in-flight entertainment.

“Stow Your Baggage” is Alexx Rouse’s tour de force one-woman show. Directed by Erika Kate MacDonald (whose name somehow always appears when brilliant, homegrown storytelling is involved), the show is a deep dive into the choices and personality traits that led Rouse to attend flight attendant training school. When I say deep dive, I mean it begins when she was a child and found herself making decisions without first asking herself what she really wanted.

Rouse’s technique is riveting. She spends a substantial section of the performance literally retelling the plot of a film, from beginning to end. Somehow, it is entirely relevant, even essential, to the overarching story. And her retelling is filled with so much cheeky enthusiasm that it’s infectious. She swings into stand-up a few times, always deftly maneuvering the territory and landing the jokes with excellent timing.

The format, the big picture and the theme all fit snugly together. This is a story about a young woman who has always allowed her life to be steered by what was “supposed to be.” It’s the story of a young woman who decided, mid-metaphorical-flight, to take control and fly her own way. She speaks with frankness and sincerity. It is such a joy to witness a labor of love that connects just as it was intended. “Stow Your Baggage,” intimate and entertaining, does just that.

You’ve got two more chances to see “Stow Your Baggage” before Fringe wraps up.