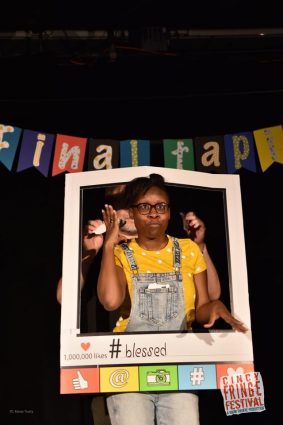 Like Lormarev Jones, I am also an “Old Millennial.” Old enough to be terribly tired, but young enough to use some fresh young lingo. So it seems appropriate that I tell you that the first…

Like Lormarev Jones, I am also an “Old Millennial.” Old enough to be terribly tired, but young enough to use some fresh young lingo. So it seems appropriate that I tell you that the first half of “My Geriatric Uterus” had me feeling so very SEEN that I was SHOOK.

Jones uses song (and music by Christopher Wood), a friendly but largely inconsequential white man and a rather sinister uterus-puppet. These tools convey the modern experience of being a woman in her mid-to-late thirties who has not yet hit any of the conventional American milestones of success — a well-paying career, home ownership, marriage, etc. As a woman in her mid-thirties with an insurmountable amount of student loan debt and a salary that barely makes it feasible to pay off the amount of interest I’ve accrued since graduating, it was almost too relatable. There was also, as you might have guessed, a special focus on the expectations, both societal and biological, of women of a certain age to have become pregnant and given birth, and the consequences of not hitting that milestone “in time.”

Jones is conscientious of the importance of time, framing the story in the context of the final episode of a public access show she had created — a children’s show for adults (SO millennial, amirite?) that has apparently been unceremoniously canceled by the network on the day of her thirty-fifth birthday. Again, an unsettling reminder of the sense of impending expiration and invisibility that women feel as they age.

I spent every moment of “My Geriatric Uterus” convinced that the performer and I had absolutely everything in common, until she hit me with a sobering reminder that we did not. Jones gets serious at the tail end of the play about the reality she faces as a black woman in America (the reader should note that I am white), and how that compounds the existential dilemma faced by women of color as they reach their mid-thirties without having children. They have to fear for the health and safety of their children before they are even born. During the many existential conversations I’ve had with myself on the subject, the idea of my potential children being targeted for the color of my skin has never entered my anxieties. It’s quite a thing to feel like you’ve really met someone at their level, only to learn that you were wearing blinders the entire time.

“My Geriatric Uterus” has a few more performances during the 2019 Cincy Fringe Festival. You should check it out. I’m fairly certain that whoever you are, whatever age you are, whether or not you are a person with a uterus, you’ll see yourself in it somewhere, and you’ll learn from it. And hey, I hear there’s cake.