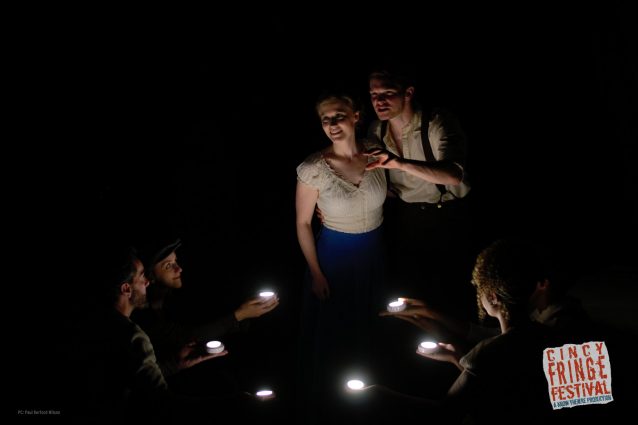 Quiet drama of 'Descent' will take your breath away

"Descent: A Murder Ballad" grapples with the fog of grief and the insidious dark heart of a small town. As implied by its subtitle, the show is punctuated by original songs, which echo back in…

“Descent: A Murder Ballad” grapples with the fog of grief and the insidious dark heart of a small town. As implied by its subtitle, the show is punctuated by original songs, which echo back in spectral fragments and reprises throughout the play. The songs are written by local playwright Hannah Gregory, a first-time Fringe producer who doubles as The Angel, our chanteuse.

The play is carried by a knockout cast, many of whom double as musicians in the small ensemble, soundtracking the action with skeletal arrangements of guitar, cello, and simple percussion. Much like the rest of the play, the songs harken back to an older time, but all have one foot solidly in the present.

Tess Talbot is stellar in the lead role as Annie, and her ability to switch on a dime between the sunny “Before” and bleak “After” sections (whose twin narratives are interwoven) is remarkable. She’s joined by Wes Carman as her young husband Paul. Together, they convincingly portray the wide-open optimism of new love, and the cold collapse in the wake of tragedy. Ellyn Broderick adds needed levity to “After” as a fellow wayward traveler, and Dylan Shelton lends quiet, weird menace to his role as The Butcher.

All told, “Descent” is an excellent new play, one which speaks across the decades to our societal expectations of women, motherhood, and grief. Its horrors unfold slowly, and uses imaginative staging and lighting to amplify their effects. But there’s also a celestial moment so simple yet perfect in its execution that it will take your breath away.

Nat Tracey-Miller is a Cincinnati-based school librarian, musician and cartophile whose love spans from Bowie to Beethoven to B.I.G. to Brubeck and hits every point in between. His writing has appeared in CincyMusic, Columbus Calling, Tome to the Weather Machine, Mixtape Methodology, and more. He records and performs locally with The Birds of America and ITAM.