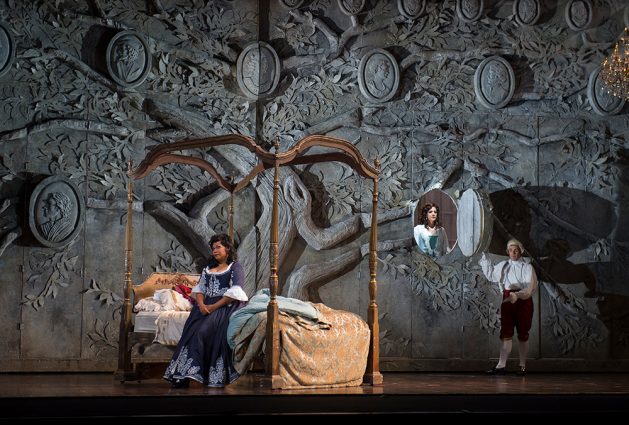 Janai Brugger as Susanna, Susanna Phillips as the Countess, and Andrew Wilkowske as Figaro in Cincinnati Opera’s production of Mozart’s "The Marriage of Figaro"
Photo credit: Philip Groshong

'The Marriage of Figaro' is a delightful, arresting experience

Cincinnati Opera's production of the well-known classic "The Marriage of Figaro" opened to a delighted audience in Music Hall last night. The performance featured beautiful operatic singing, playful and often bawdy stage action, and a…

Cincinnati Opera’s production of the well-known classic “The Marriage of Figaro” opened to a delighted audience in Music Hall last night. The performance featured beautiful operatic singing, playful and often bawdy stage action, and a lush orchestral score. The lavish historic costumes and arresting stage set made for a visually dynamic and impressive viewing experience. First performed in Cincinnati at the Cincinnati Zoo Pavilion in 1956, this contemporary production of “The Marriage of Figaro” presents a classic story in a fresh and lively way.

The familiar melodies of Mozart’s score were magnificently rendered by the orchestra and Marc Piollet’s conducting. The score is light and lovely, and wonderfully familiar to anyone who enjoyed Bugs Bunny cartoons. The music felt warm and full of movement, and filled up the recently renovated performance hall. As the opening notes filled the room, you could feel the audience sigh with delight.

The stage set and intricate historical costumes, designed by Leslie Travers, and the rich lighting design by Thomas C. Hase, created a stunning visual tapestry that the performers utilized brilliantly. They ducked in and out of doors, hid in corners, and moved through the space in a way that felt both cleverly conceived and spontaneous. I particular admired the way the set made use of historic furniture in a surprising way in the garden scenes. The lighting created moods, time of day, and emphasized some of the opera’s symbols and themes. The use of shadow was particularly arresting, including the shadows of the bed and the spotlights on characters during tense moments.

The entire cast was sparkling and dynamic, and they made it look easy to sing complex passages while engaging in comedic stage action. Andrew Wilkowske was an energetic and impressive Figaro. The leading women, including Janai Brugger as Susanna, and Susanna Phillips as Countess Almaviva were sympathetic, likable, and managed to balance the comedic and emotional components of their roles beautifully.

Rihab Chaieb as Cherubino was a crowd favorite. Chaieb played the part of a longing youth with humor, energy and physicality. Most of the women in this story endure unwelcome advances and double standards, but the contemporary audience, perhaps reacting to our current era of increased awareness and discussion surrounding harassment, reacted with laughter and cheers to some of the lines spoken by female characters as they fought back. Members of the cast turned to the audience multiple times, including a moment in which Figaro raised the lights to look at us, bringing the audience further into a well-told and beautifully realized production.

Caitlin Tracey-Miller loves museums, art, reading, and freshly baked ginger cookies. She works at the Cincinnati Art Museum and enjoys going on adventures with her husband and toddler.