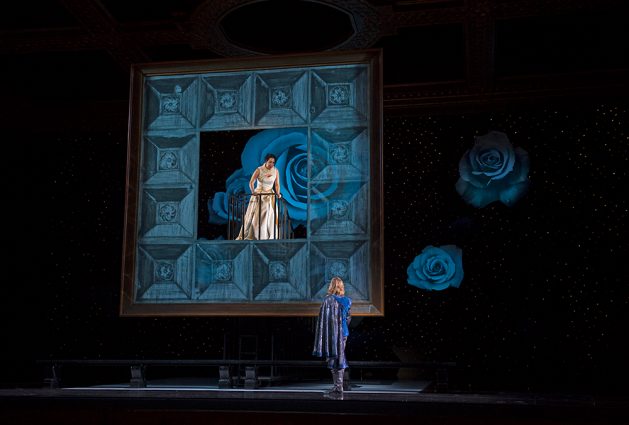 "Romeo & Juliet" — Still a tragedy, even in French

As a child of the early '80s with a penchant for angsty pop rock, Baz Luhrmann's 1996 masterpiece "Romeo + Juliet" was my first emotional exposure to Shakespeare's classic. With Leonardo DiCaprio as the titular…

As a child of the early ’80s with a penchant for angsty pop rock, Baz Luhrmann’s 1996 masterpiece “Romeo + Juliet” was my first emotional exposure to Shakespeare’s classic. With Leonardo DiCaprio as the titular Romeo and Claire Danes as my pre-teen crush Juliet, I finally understood what true love was supposed to be about. I recall I clung to that love-by-way-of -fatal-tragedy ethos far too long, whenever I happen upon my 8th grade journal.

My most recent emotional experience with literature’s ultimate “pair of star-crossed lovers” was just recently at Cincinnati Opera. The familiar tale played out over around three hours, and I couldn’t help being pulled by nostalgia for those earlier visions. Where Leo wore his angst on his face, tenor Matthew White delivered it via voice. Star-crossed with soprano Nicole Cabell, the tragedy unfolded before us in operatic French.

Cincinnati Opera, in it’s 99th season (the performance on June 27th was 99 years to the day), is renowned for its set and costume design. A single red rose stood massively in the center of the stage before the curtain. We stared down into the blood-red petals, knowing what was to come before our time together was up, and knowing it would be beautiful all along. A note I jotted down during the performance says “looks like a Baroque painting.” In the ball scene, where Romeo and Juliet first spy one another and fall head over heels (as teenagers do), the cast could have been from a 16th century painting.

The performance isn’t all tragic emotional gymnastics and teenage deaths. It had its fair share of comedy and slapstick — baritone Hadleigh Adams’ Mercutio stole the show early in Capulet’s manor before giving the spotlight back to White. And, while you’d think the man called Prince of Cats would be a good time as well, tenor Piotr Buszewski’s Tybalt is as serious as a stab wound. And that’s basically his goal for the entire performance until Romeo makes him a grave man.

The duets between Cabell and White were impressive and stirring. They made me really kick myself for not having French-speaking parents so I could follow along without the super titles. Which brings me to my one complaint. Media seats are rather close, so I spent a fair amount of time holding my head tilted way back to read the words. I’d reckon anything farther than six rows offers a tremendous show and less craning.