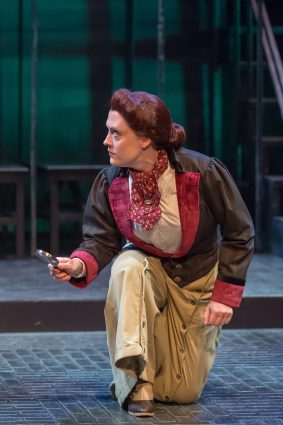 The game is afoot with 'Miss Holmes'

“Dr. Watson, when was the last time you felt safe?” Doctor Watson’s hesitant smirk is all the audience needs to understand the answer. With this question, arguably one of the most iconic partnerships in all…

“Dr. Watson, when was the last time you felt safe?” Doctor Watson’s hesitant smirk is all the audience needs to understand the answer. With this question, arguably one of the most iconic partnerships in all of literature begins. The catch? In this version, it is MISS Sherlock Holmes, and Doctor Dorothy Watson. Kicking off Cincinnati Shakespeare Company’s 2019-2020 season — aptly named The Year of the Woman — “Miss Holmes” brings the famous crime-solving duo of Holmes and Watson to the stage.

I will admit, I am most familiar with the world of Sherlock Holmes from many viewings of the recent BBC television adaptation. That is a hard thing for any self-confessed book lover to admit, but some prior knowledge of the reoccurring characters in the world of Sherlock Holmes helped me understand certain plot points of the play more quickly than I would have otherwise.

In “Miss Holmes,” Sherlock and Doctor Watson are portrayed by Cincinnati Shakespeare Company veterans Kelly Mengelkoch and Sara Clark, respectively. Sherlock and Doctor Watson are approached by Lizzie Chapman (Maggie Lou Rader), the wife of a Scotland Yard Inspector whose two previous wives died under mysterious circumstances. Sherlock gleefully proclaims “The game is afoot!” as the crime-solving duo find themselves fighting not only for the truth, but for the respect they so rightfully deserve.

I initially wondered why the character of Mycroft Holmes (Jeremy Dubin), was not also reworked to be a female character. The reasoning becomes clear as Sherlock and Doctor Watson continually find themselves being underestimated and ignored simply because they are women. As a high-ranking government official, Mycroft had to remain a man. A woman would never have been allowed to occupy such an important political position. We are talking about Victorian Era England after all.

It is all too easy to see the parallels drawn to modern day issues women face, such as the struggle to be taken seriously as professionals, or the expectation that they support their partner, no matter the consequences to themselves. Clark’s Doctor Watson has a particularly poignant moment when she recounts the numerous struggles she faced in order to obtain her medical license. Other standout moments in the show include several scenes with Company member Miranda McGee, who has an ability to slide between various accents with a natural ease. Playing several different roles over the course of the show, McGee most notably plays Sherlock’s opinionated landlady Mrs. Hudson, who lends wonderful bits of comedic relief to the overall serious tone of the plot.

It is the costume design that captures the atmosphere and time period in which the play is set better than any other element. Sherlock Holmes is a character who needs to remain mobile and quick on her feet. This is a task not so easily accomplished in the voluminous skirts that were popular for women at this time, as anyone who has every worn one can attest. Costume Shop Manager and Costume Designer for Miss Holmes, Clara Jean Kelly, explains, “Bicycles were beginning to gain popularity around this time, so it was not uncommon for women to wear a ‘split skirt.’ This is a wide legged pair of pants that gives the illusion of a skirt when a woman stands with her legs close together.” Thus, Sherlock has all the mobility she needs to chase down and fight the bad guys while still having to adhere to the strict societal code of proper attire. The elaborate bustles of Lizzie Chapman and Mrs. Hudson also deserve a special mention, as do the intricate hats they both wear. No detail is spared in these costuming choices, making it visually clear that your attention should be solely on the women whenever they are onstage.

“Miss Holmes” runs from July 19 to August 4 at Cincinnati Shakespeare Company. With all the mystery and intrigue of a traditional Holmes and Watson adventure, this show brings to light the struggle to shed traditional roles thrust upon women, and what can happen when anyone takes the space they need to be their true selves, rather than waiting for it to be given to them.

Amanda Carr is the Gift Processing and Donor Services Coordinator at ArtsWave.