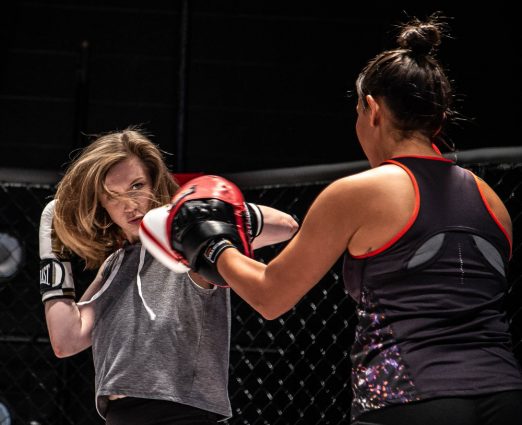 Know Theatre throws their first gut punch of the season

If you have never been to Know Theatre of Cincinnati before, the one thing they do better than any other theater in town is the ever-changing use and playfulness of their performance space. "The Girl…

If you have never been to Know Theatre of Cincinnati before, the one thing they do better than any other theater in town is the ever-changing use and playfulness of their performance space. “The Girl in the Red Corner” by Stephen Spotswood arrests the audience visually before the show even begins. The audience surrounds the stage on three sides — a stage that looks very close to an actual Mixed Martial Arts ring. Mixed Martial Arts, more commonly referred to as MMA, is one of the fastest growing sporting events in the country. If you are unfamiliar with the sport, it is like a combination of boxing and wrestling, with fewer rules and a few more kicks. The actors even eschew to the time-honored martial art tradition of no outside footwear on the mat, going barefoot for the entirety of the show. If this is your first time experiencing the MMA world, “The Girl in the Red Corner” provides a wonderful insight into what it means to fight, both by MMA rules and in the real world, where rules no longer seem to apply. It begs the question: just what are you fighting for?

The play follows Halo (Tess Talbot) as she jumps into the world of MMA fighting for the first time. While her motivations for beginning her training remain murky, even to Halo herself, her reluctant instructor Gina (Abi Esmena) wastes no time in putting Halo through rigorous training. Halo finds herself in an even tougher position with her personal life, namely with her lackluster job and tensions amongst her family members (Mindy Heithaus, Jennifer Joplin, and Adam Tran). It isn’t until things reach a boiling point at the end of the first act that the literal and metaphorical fists start to fly. Each of the cast members have different moments in which to shine, and each do so with a natural ease that can be difficult to come by in a show that requires such demanding physicality.

What would a show about MMA be without a few good stage fights? k. Jenny Jones’ fight choreography is the standout element that makes takes the authenticity of this production onto a whole new level. Recognized as the only female Certified Fight Director by the Society of American Fight Directors (commonly known as SAFD), k. Jenny’s signature style of stage combat, known as Scrappy Fighting, is utilized to perfection by each of the cast members. Making stage combat look real while maintaining a level of control and safety is no easy task, much less when it consists of having to make actual skin to skin contact with your opponent night after night. The sheer physicality required to execute the fights is awe inspiring.

Another interesting aspect the show touches upon is what it means to fight in a psychological sense. Halo quit her latest job due to unwanted attention from her male boss, only to find herself in another low-paying job that requires her to use a more effeminate name and to smile all the time. As her new (and it should be noted female) manager explains, it is because customers are more likely to listen to what she has to say if she seems more feminine and upbeat. Anyone who has worked a low-wage, customer service-based job could tell you these tactics rarely, if ever, work. That doesn’t even begin to touch upon how demeaning it is to be told that you alone are not enough, you have to become someone else in order to succeed. Talk about a gut punch, even if it is not a literal one in this case.

After the show, I began to wonder why it was named “The Girl in the Red Corner.” If you’re anything like me, a sound bite from any number of boxing matches played through your head of an announcer introducing the two opponents about to fight: the fighter in the red corner and one in the blue corner. So why is this particular show called “The Girl in the Red Corner?” I believe it is because the fighter in the red corner is traditionally the fighter favored to win the match.

Amanda Carr is the Gift Processing and Donor Services Coordinator at ArtsWave.