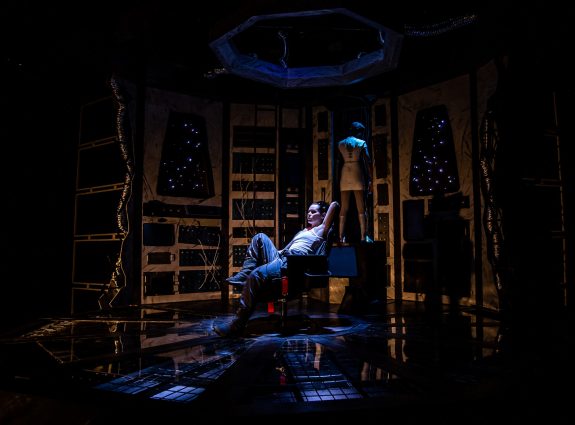 Jordan Trovillion as Operator and A.J. Baldwin as Beacon in "The Absentee" at Know Theatre of Cincinnati
Photo credit: Dan R. Winters Photography

Politics get personal (in space!) in 'The Absentee'

In the year 2088, intergalactic travel is made possible by "Beacons" — small space stations that facilitate faster-than-light travel. Each beacon has an Operator and an AI assistant. Beacon 44.AR.90 is particularly remote, and its…

In the year 2088, intergalactic travel is made possible by “Beacons” — small space stations that facilitate faster-than-light travel. Each beacon has an Operator and an AI assistant. Beacon 44.AR.90 is particularly remote, and its Operator (Jordan Trovillion) likes it that way. After a U.S. Space Forces ship explodes nearby, all traffic in the area comes to a complete halt. The Operator is alone with pouches of lager and vodka, and the AI (A.J. Baldwin) stops responding every time it is treated too much like a human.

Isolation is a central component of “The Absentee,” a stunning new play on stage at Know Theatre of Cincinnati from now until October 5. It comes from a general misanthropy at first, but as we get a clearer view of the Operator, her personal isolation comes more into focus. We see its origins in grief — after her girlfriend suffered terribly from a future disease and passed away, the Operator fled Earth and everything on it. Over time, we also see how utterly she has disengaged politically.

Most of that insight comes from her shockingly in-depth conversations with Glenn (Nathan Tubbs), a volunteer canvasser for the presidential campaign of Senator Huerta. Glenn’s earnest but frank idealism are a perfect foil for the Operator’s tired cynicism. The Operator, it turns out, is not entirely without need for human connection, but she steers the conversation away from politics when she can. At first, it feels familiar. You may even find yourself thinking you’re about to witness a straw man argument for (or against) political engagement. But the Operator is no two-dimensional rhetorical device. Her disengagement from politics is rooted in a deeply heartbreaking personal tragedy, and her resentment feels both palpable and just. That feeling is a testament both to the stunning performance of Jordan Trovillion and the skillful writing of Julia Doolittle.

Doolittle’s characters are all remarkably well-rounded. It takes a deft hand to give ancillary characters a sense of being alive, and hers is as deft as any. The Operator’s only other point of contact is Zala (Hannah Jones), a military liaison from a rescue ship, whose contact is almost always brief and curt. A lesser production might treat Zala as a mere source of annoyance or an obstacle. “The Absentee” gives her depth, motivation and chances to shine (which Hannah Jones certainly takes), all without inordinately obstructing the plot. Even the Beacon, the station’s AI, has its moments. In times of extreme duress, it gives the Operator comfort by essentially transforming into her deceased girlfriend. A.J. Baldwin’s versatility in transitioning between sterile machine and loving partner is enough to make your head spin.

All this plays out in an inventive set that’s reminiscent of “Doctor Who,” but with a welcome layer of grit. It ends up being evocative of the balance between pragmatic pessimism and unending hope that the show maintains. Under Kate Bergstrom’s direction, this is one of those productions where everything clicks just right. With several twists that you may not see coming — and several hints that only occurred to me afterwards — it’s also the kind of show you should see more than once.

Despite being set almost a century into the future, “The Absentee” is a remarkably relevant story for democratic engagement today. Don’t miss it — and make sure to vote in November, wherever you are in the galaxy.