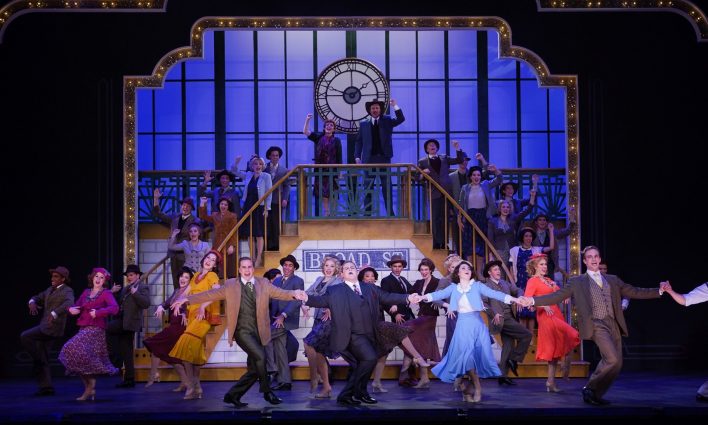 Shuffle off to '42nd Street'

When I was a kid, my father and I would have a movie night almost weekly. One of the movies I remember us watching repeatedly was “Life With Mikey.” The story in the film was…

When I was a kid, my father and I would have a movie night almost weekly. One of the movies I remember us watching repeatedly was “Life With Mikey.” The story in the film was great and featured amazing talent, but my absolute favorite part of the movie was the final scene where a young Anaysha Figueroa as Kimberly Denise Jackson belted out “Lullaby of Broadway” from the classic “42nd Street” musical in her talent agency audition. The soul in the little girl’s voice stood out to me and made the song one of my top five favorite Broadway numbers. Therefore, when I heard that the CCM Theatre Department would be performing the production, I knew I’d have to see it. I was not disappointed.

For the unfamiliar, the musical centers around Peggy Sawyer, a talented young performer hoping for her big break on Broadway, and Julian Marsh, an iconic Broadway director looking to turn his fortunes around with an ambitious musical. When the lead actress, Dorothy Brock, injures herself on stage, Sawyer finally gets the opportunity of a lifetime.

As I sat in the audience on opening night watching the story unfold, I was mesmerized by the sheer amount of talent I was seeing. From the stage to the pit, there was not one weak link or mistake. Bailee Endebrock, who masterfully played the gifted and starry-eyed Sawyer, was balanced incredibly by Jamie Goodson, who played the arrogant and confused Brock. Other standouts included Nick Berninger, who completely embodied the role of Marsh; Camila Paquet, whose comedic timing was as fantastic as her vocals; and Jack Brewer, whose powerful tenor soared throughout the production.

Some of the biggest highlights of the show came from the chorus. Witnessing them sing and dance together was nothing short of extraordinary as the tap choreography was exceedingly intricate and none of them missed a beat. The harmonies were tight and the personalities of each chorus member differed from the rest. At the end of the show, as the introductions ended and the curtain began to close, entire cast reprised the last number and reminded me of the classic Disney and Broadway vocals that signaled the end of magnificent stories, leaving me wanting more.

The University of Cincinnati College-Conservatory of Music is jewel in the Queen City’s crown. The students on and off stage never cease to impress me with their talents. While the “Boulevard of Broken Dreams” is a reality, if what I witnessed in this production is any indication, I have no doubt that many of the talented students will find a home on 42nd Street.

Andre DuBois is the Engagement & Event Coordinator at ArtsWave. Outside of that, he is also a songwriter, producer, musician and protector of soul music and African-American culture.