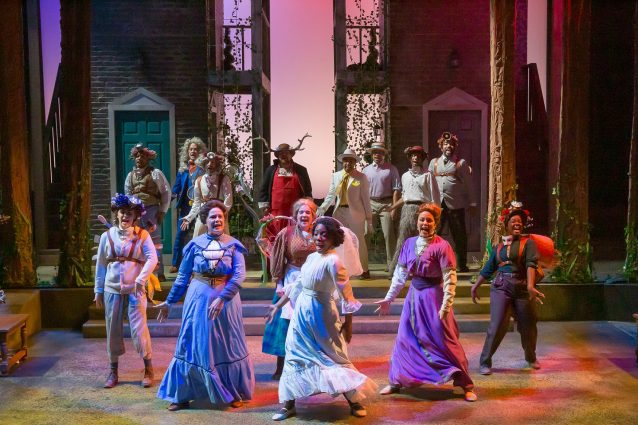 If you ever wanted to see a Shakespearean sitcom, "The Merry Wives of Windsor" at Cincinnati Shakespeare Company is it! It has everything from crude hand gestures to men fighting for the same love interest…

If you ever wanted to see a Shakespearean sitcom, “The Merry Wives of Windsor” at Cincinnati Shakespeare Company is it! It has everything from crude hand gestures to men fighting for the same love interest to the town drunk hitting on the wives of his buddies. Spoiler Alert: Somehow, in the end, everyone remains merry friends. I laughed. I cringed. I clapped. It’s the perfect comedy for a night out. There were two live bloopers — a door sign falling off and beer spilling on the table. The cast handled both well as the audience hollered with laughter.

The beautiful, diverse cast has an equally beautiful set to accommodate them. The stage consists of two tall brick buildings and tall trees. There’s a lattice filled with vines that crawl to the top of one of the buildings. The lighting makes it feel like the sun is just setting. I watched as two men stood in between the buildings and motioned for one another — and the audience — to come up and do shots. I smiled, thinking it was just pre-show banter, until two members of the audience walked right on stage! They each got a shot of whiskey, downed it, paid and walked back to their seats. One would think I wouldn’t be so shocked when their sign said “Shots Only — $9,” but I was. That was the coolest thing to me. This bar was open before the show and during intermission. I recommend it at all shows!

Once the bar is removed from the stage, the show begins with the cast filing in through the aisles, marching with a sea of signs promoting Women’s Rights! This sticks with you throughout the play because you’ll see how women are treated more like objects than human beings.

Master Page (Sylvester Little, Jr) has a total of three men vying for the affection of his daughter. One suitor is a friend of his cousin who is sitting on a nice sum of money. Another is a well-off French Doctor. The last suitor is a common boy. Master Page doesn’t even think to ask his daughter who she might be interested in, but rallies behind his cousin’s friend to marry her. He even supports him in a dual against the French Doctor!

The wives also find out about Sir Falstaff’s plan when they realize they both have received the same letters. They devise a plot of their own to humiliate Falstaff, and he won’t be the only one receiving their revenge. Mistress Ford has a few things in store for her own husband.

In life, I’ve met some unsavory humans who I thought were my friends before they went behind my back. If I was as smart as the women in this play, I would have gotten playful revenge and still be friends with some of those people today.

One lesson I learned from “The Merry Wives of Windsor” is loyalty to love. The love of yourself to not be disrespected. The love of following your heart. The love of your significant other. If you stay true to these loves, life will always be an adventure of your happiness with filled with special people.

Marissa Staples is Cincinnati published author and writer for The Voice of Black Cincinnati. She developed her love of arts from her mother, Kandi. Being a native of Cincinnati, she loves to travel. If she is not traveling, you can find her reading, writing, volunteering or drinking wine. Wine always brings smiles, friends and creative dialogue.