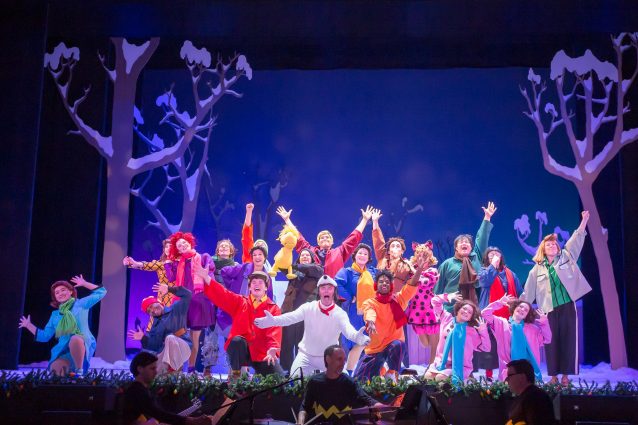 'A Charlie Brown Christmas' is all good, no grief

This year, The Children's Theatre of Cincinnati has brought a 54-year-old holiday tradition to a fresh new light. "A Charlie Brown Christmas" is the story you know and love from the 1965 holiday special, brought…

This year, The Children’s Theatre of Cincinnati has brought a 54-year-old holiday tradition to a fresh new light. “A Charlie Brown Christmas” is the story you know and love from the 1965 holiday special, brought to life on the stage. It begins with the outline of a ’60s style TV projecting animated images of Charles Schulz’s “Peanuts” characters, starting with Charlie Brown himself.

In a flash of light, the kids hop out of the screen and onto the stage, then walk away. It’s worth noting that the way the characters walk and otherwise move is firmly rooted in the animation style of the original show. It’s a clever effect that feels at first unusual, then nostalgic.

As an aside, I was relieved when my daughter immediately recognized the stage-within-a-stage as a television. After she recently referred to a physical envelope as an “email,” I’ve been especially sensitive to the things she says that make me feel old.

Jeff Shearer’s costume adaptations for the production deserve a shout-out. Care has been taken to make each character as memorably reminiscent of their comic strip/television counterpart as possible. Charlie Brown (Joseph Green) wears his signature yellow shirt with a brown zigzag pattern. Linus (Jeremy Neale Cox) has his blue blanket. Most creatively, Pig Pen (Ian Timothy Forsgren) has a dirt cloud emerging from his clothes. Snoopy (Bob Herzog) somehow manages to look convincingly like the famous pup despite having a dapper sweater built into his costume. My daughter’s personal favorite — and, by extension, mine — is Woodstock (Joey Logan). The little yellow bird is accomplished with clever puppetry, which is always a big win.

After the gang is all introduced, the curtain rises on a frozen pond, where they’re all out ice skating. A jazz trio provides the music, playing Vince Guaraldi’s iconic soundtrack (if it wasn’t already, this music will get stuck in your head). Charlie Brown is feeling depressed. He can’t quite get into the Christmas spirit when he looks around and sees how commercialized the holiday has become. He seeks psychiatric help from Lucy, who suggests he find the missing spirit by directing their school’s Christmas pageant.

At first, that only brings even more trouble. No one seems to know what Christmas is all about. Of course, Linus has an answer for him, and his well known monologue is delivered beautifully. Charlie presses on with a renewed determination, even though everyone seems to be more interested in dancing than rehearsing. Honestly, who could blame them with that music, though? Eventually, after giving poor Charlie Brown more than his share of not-so-constructive feedback, the kids pull together to find the warmth and kindness at the center of the holiday spirit.

This production will warm your heart. It’s both familiar and fresh, full of great music and enthusiastic performances. Plus, it’s hard to go wrong with a show that features Bob Herzog wagging a physical tail. You kind of get the impression that’s what he’s always doing in his mind.

Catch “A Charlie Brown Christmas” at Taft Theatre through December 16.