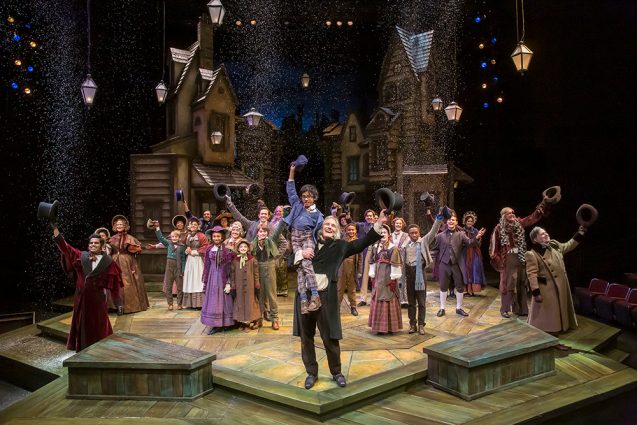 Playhouse again knocks their annual holiday tradition out of the Park

The holidays represent many things to people.  When we get to this time of year, we hear the music change and the stores get more crowded. People start using vacation days and hitting the highways…

The holidays represent many things to people.  When we get to this time of year, we hear the music change and the stores get more crowded. People start using vacation days and hitting the highways and airports to visit friends and family — or maybe to escape them.

In a season that has become more and more defined by deadlines on sales, bustling delivery trucks and checking items off a list, it could be so easy to lose the magic of the season. But one of the most powerful ways to hold on to the real meaning of this time of year is to cling to and celebrate tradition. In Cincinnati, with such a rich and vibrant arts community, one of the most standout forms of holiday traditions is the annual production of Charles Dickens’ “A Christmas Carol” at Cincinnati Playhouse in the Park.

I have had the great pleasure of seeing many performances at Playhouse in the Park. However, being there for this season’s production of “A Christmas Carol” stirred memories from long ago of lining the seats with anticipation during an elementary school field trip. It also brought me back to previous years’ shows that I attended with friends and family, some who are still here and others I can visit only in memory. This is truly one of the city’s great traditions, and it was a joy to once again experience it — this time with my 9-year-old daughter.

The first thing you’ll notice when you arrive is the massive set. Shops and storefronts from Dickens’ mid-19th century London make up the backdrop, and when the production starts townsfolk make their way through the streets on a busy Christmas Eve, complete with carolers. The detail and scope of the set is an immense factor in the total suspension of disbelief that transports you to the proper time and place. This, along with the venue itself, makes you truly feel part of the production as Ebenezer Scrooge begins to trudge through the streets in the opening act.

It was truly magical to watch my daughter’s face when the ghosts arrived, each more vibrant and whimsical as the last. Although, I do want to note as a parent, it was not lost on me she buried her face in my arm when the Ghost of Christmas Future arrived and…”provided some insight” to Scrooge’s final destination.  But great theater, above all else, makes you feel something. This production certainly does not disappoint at any age.

The entire cast brought a vibrant magic to the stage. The audience was moved by this contagious, festive spirit as the story of hope and giving unfolded. Charles Dickens’s story of redemption stands the test of time and is as relevant today as it was when he wrote it nearly 175 years ago. The skilled cast, the music, the lighting, the costumes and the venue itself offer a reprieve from the bustle of the season and cast a light on the humanity within each of us.

Let us all take a lesson from Scrooge and “honour Christmas in our hearts, and try to keep it all year.” If you’re feeling a little “Bah Humbug” in your heart, or simply looking for a little extra magic in your holiday season, be sure to make Cincinnati Playhouse in the Park’s “A Christmas Carol” a part of your tradition.