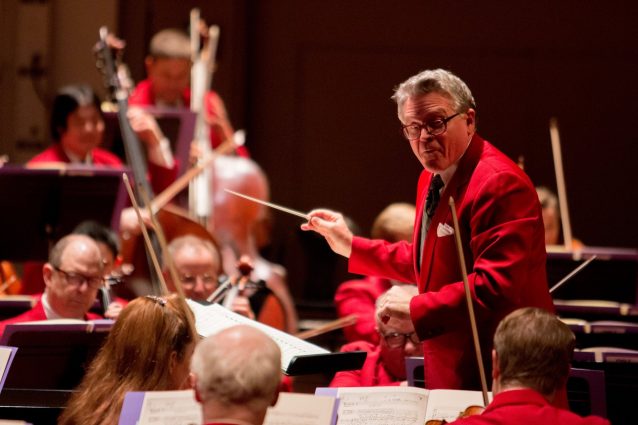 Hearts were melted by the Lollipops Family Concert

As the crowd settled into their seats for the Cincinnati Pops' Lollipops Family Concert, "The Snowman," I found myself feeling lucky to be in Cincinnati. The Music Hall auditorium was filled to the brim with…

As the crowd settled into their seats for the Cincinnati Pops’ Lollipops Family Concert, “The Snowman,” I found myself feeling lucky to be in Cincinnati. The Music Hall auditorium was filled to the brim with festive children and their adult family and friends. Kids of all ages chatted excitedly as they settled into their cushions, jingling the bells the ushers distributed and pointing to everything around them, from the glittering chandelier to the musicians’ red jackets.

Once the performance began it did not disappoint. John Morris Russell brought his usual enthusiasm and energy, carrying the crowd right along with him. He instructed the children to participate with claps, voices and bells, and the crowd joined in a holiday favorite sing-along with gusto.

Howard Blake’s “The Snowman” was beautifully rendered by the orchestra. This beloved English winter story, originally a picture book, follows the adventures a young boy and his suddenly alive snowman. The music and storyline felt both magical and a little melancholy, and the beautiful illustrations in the film captivated the children around us.

Thom Strickler, a member of Cincinnati Boychoir, did an incredible job singing the haunting and lovely melody for the scene with the flying snowman. The short film captures many emotions — joy, boredom, excitement, loss and curiosity — and it captures something essential about childhood itself.

The concert ended with lively audience participation during Leroy Anderson’s classic, “Sleigh Ride,” a rousing way to end the morning.

My 18-month-old jingled her bell and clapped at the Snowman’s antics, completely enthralled throughout. I feel so thankful to the Cincinnati Pops for providing opportunities like this for engaging the next generation of classical audiences.

Caitlin Tracey-Miller loves museums, art, reading and freshly baked ginger cookies. She works at the Cincinnati Art Museum and enjoys going on adventures with her husband and toddler.