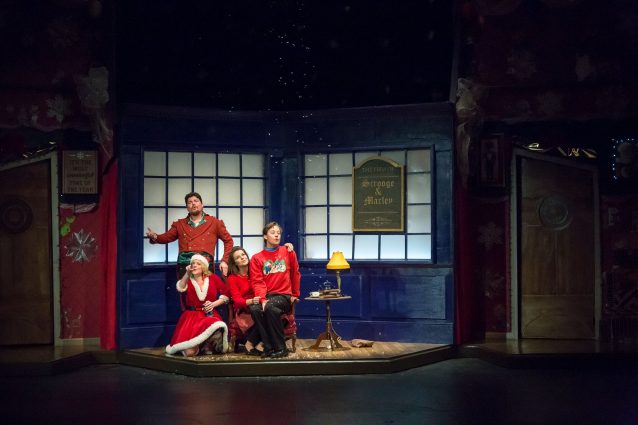 'Every Christmas Story' has it all

Many local arts organizations carved out a holiday niche long ago. Cincinnati Ballet has been performing "The Nutcracker" every year since at least 1974. "A Christmas Carol" has graced the stage of Playhouse in the…

Many local arts organizations carved out a holiday niche long ago. Cincinnati Ballet has been performing “The Nutcracker” every year since at least 1974. “A Christmas Carol” has graced the stage of Playhouse in the Park for 29 years. Cincinnati Shakespeare Company didn’t settle on a single holiday tradition, however. They got greedy, much to our benefit, and decided to take them all on. For 14 years now, they’ve presented “Every Christmas Story Ever Told (and Then Some!)” every holiday season.

This year’s iteration of the fast-paced, jam-packed special kicked off this weekend. It begins, after everyone has had a chance to sit on Drunk Santa’s lap, with Maggie Lou Rader prancing deliberately onto the stage, smartly dressed and moving with grace. She begins reading from “A Christmas Carol” by Charles Dickens. The production is quickly, intentionally thrown off the rails when Justin McCombs decides that “A Christmas Carol” has been done enough. Billy Chace stumbles on stage to agree, and Drunk Santa (Miranda McGee) is generally up for anything. So, begrudgingly, Maggie agrees to a marathon run through every BHC (Beloved Holiday Classic) they can think of.

The stories they choose run the gamut from TV specials to classic films to traditional stories, even throwing in traditions from around the world. Every year, the production changes to keep it fresh. This year, with the event still top of mind for many Cincinnatians, BLINK played a role in softening the PR image of fruitcakes.

The four actors are perfect complements for one another, down to their physical presence and movements in the space. Maggie, as mentioned, brings frustrated elegance to the stage. Justin, ever the clown, thwarts it as the absurd, bright-eyed, lovable doofus. Billy, while also the clown, projects confidence and eloquence, while Santa/Miranda keeps all of them grounded with a foundation of snark.

Above all else, “Every Christmas Story Ever Told (and Then Some!)” is fun. A lot of fun. You can tell by the improvised interactions on stage that the actors enjoy themselves, and like all the greatest holiday traditions, it makes you feel like a part of something. So if you can’t decide which annual holiday show to attend this year, you’re in good company. Why not try them all at once?

Zach Moning is the marketing & communications manager and resident dad joke technician at ArtsWave. Reach him here with questions or comments about ArtsWave Guide.