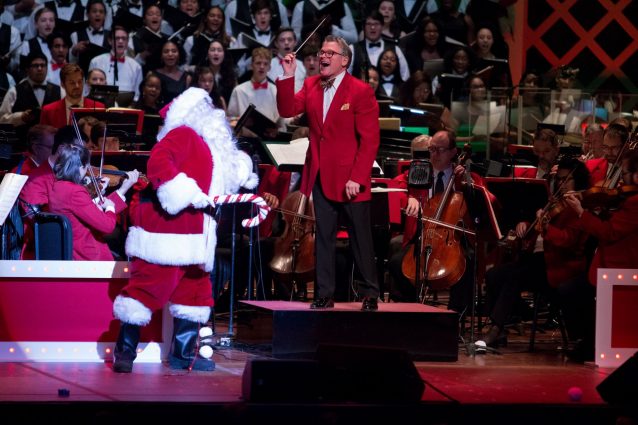 I’ve been trying to decide if I just never noticed it before or if the Cincinnati Pops Orchestra events always had great set lighting. It’s also possible that great lighting is one of those things…

I’ve been trying to decide if I just never noticed it before or if the Cincinnati Pops Orchestra events always had great set lighting. It’s also possible that great lighting is one of those things you never notice until suddenly you do. Seeing Music Hall decked out in trees, strands of colors, glowing presents, and garland had me feeling the Christmas spirit fully for the first time. I hadn’t yet taken my daughter to be terrified of the mall Santa, so this was a welcome seasonal kick-off.

There were carol singers on the second level, filling the grand lobby with song. Perhaps the mass of folks awkwardly crammed together in the security line were vaguely soothed. The ambiance, once inside the building, was pretty magical.

Conductor John Morris Russell, who was recently nominated for a Grammy, makes every Pops concert an event. This one featured choral singers from Winton Woods HS and SCPA accompanying soloist Megan Hilty. Nostalgia was in full swing as she led us on a Christmas singalong. There’s also something deeply sobering about hearing yourself sing along with a concert orchestra and a renowned Broadway singer. I’m abysmal.

More than just singing, the show featured several dance numbers by director Shari Poff’s Studio for Dance. They found that balance of being good but not taking it too seriously. When Hawaiian Santa came out and drank a cocktail during “Mele Kalikimaka” the audience was loving it. The previous number, “Pat-a-pan,” a French Christmas carol, got the audience all riled up. There’s something about a saxophone solo that says Seasons Greetings like nothing else.

For those who feel like the Symphony is stuffy and unapproachable, there really is no better way to break that assumption than to see something the Pops puts on. The whole production is so much more than the orchestra. While their performance, at the caliber and level they play, is always incredible, the whole package is what makes our orchestra so unique. The lighting, the subtle touches in warmth and glow, spotlighting and faint strobe envelope the viewer. The fact that my calves were sore from tapping my feet is a nice reminder that we’re really there for the music.

It could be argued that the highlight of the evening was the free Graeter’s ice cream at the end of the show. It was some kind of peppermint chocolate, small batch, CSO-only variation. There were hundreds of scoops set outside the theater after the performance. The fact that we carried them out into a drizzling rain didn’t matter to us one bit.

The Cincinnati Pops Orchestra will change your mind about what orchestral and choral music can be for those who are new to it. For those who already love live concert music, the Pops continues to be a gem for the city.

By the time you read this it will be too late for “Holiday Pops,” but you can (and should) join the Pops on New Year’s Eve for “Frank & Ella.” Capathia Jenkins is singing, and there’s no better way to end a decade.