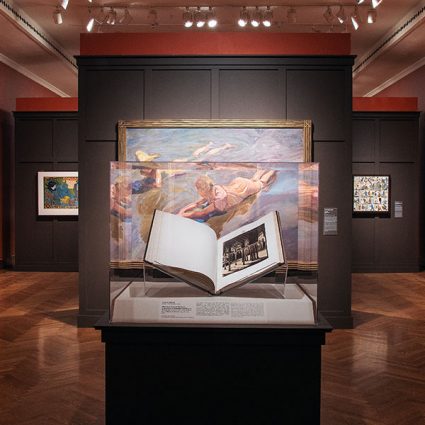 Spain comes to the Queen City bearing gifts — 4,000 years' worth

The Spanish artist Francisco Goya immortalized the rich and famous of his country in elegant portraits — radiant oils on large canvases, the better to show their position in society. For that, he became known…

The Spanish artist Francisco Goya immortalized the rich and famous of his country in elegant portraits — radiant oils on large canvases, the better to show their position in society. For that, he became known as a leader in the art world’s Romantic movement.

But this portraitist of the powerful became equally as famous for lampooning the social icons of his time in satirical sketches drawn on paper using humble black chalk. And for that he became known as one of the world’s first political cartoonists.

Both facets of his work can be seen until January 19 at the Cincinnati Art Museum where more than 200 works are on display in “Treasures of the Spanish World.”  The exhibition celebrates 4,000 years of artistic tradition from Spain and Portugal to the Americas.

Goya’s work appears with that of El Greco, Velazquez, Murillo and even American John Singer Sargent, who traveled and painted extensively in Spain. But the exhibition features far more than paintings. It includes pottery and domestic arts, jewelry and religious vestments, books, posters, prints and maps.

The works, on loan from the museum and library of New York City’s Hispanic Society of America, trace Spanish art from prehistoric times to the early 20th century. Assembled by New York philanthropist Archer M. Huntington at the start of the 20th century, they present an impressive  pageant of Spanish art and manuscripts that influence the art world even today. During his lifetime, Huntington amassed the largest collection of Spanish art outside of Spain. The collection predates the modern era. Thus, it features no Pablo Picasso, no Salvador Dali, no Frida Kahlo nor Diego Rivera. Instead, it presents a chronicle of the artistic traditions on which those artists built their work.

The collection comes to Cincinnati as the Society renovates its museum and library in upper Manhattan.  It is a first in more ways than one. Many of these works have never been shown outside of New York since Huntington assembled his collection and some are being shown publicly for the very first time. Visitors are treated to a glimpse of Spain’s glorious history, told through arts and crafts that range from the everyday to the elegant, the sublime to the ridiculous.

The CAM exhibition introduces us to Spanish art in prehistoric times through jewelry, pottery and household implements crafted by unknown artisans — times when pots were thrown, tiles inlaid and silver and brass were forged into household and personal finery in the form of jewelry, bracelets, ladles and door knockers. Yes, door knockers!

March forward through the galleries and Spanish history to next discover the Romans who conquered the Iberian peninsula and decorated it with statuary that since have lost bodies and heads — an alabaster bust of an unnamed warrior and the headless torso of Diana, the goddess of the hunt.  We gaze unharmed at the terrifying head of Medusa portrayed in mosaic with her dreadlocks of snakes. Then come stories from the Bible and crusading saints, drawn across illuminated manuscripts. Noah appears on a large ceramic platter, pictured in his tiny boat under the jaws of a giant sea monster.

Enter now the age of discovery and the adventures that opened the New World. It was the Spanish, after all, who explored the Americas and circumnavigated the world, recording its wonders and hazards in colorful maps and navigation manuals.  Then comes the Baroque where we meet El Greco’s “Penitent St. Jerome” and sense his grief as he stares into the eyes of the dying Christ upon the crucifix.

As we come to the art of the Spanish Americas, we encounter an illustrated genealogy of the rulers of Macuilxochitl, a prominent area of Mexico in the 1500s, and see pairs of family members recorded in succession. A skeleton grins at us from a sort of personal triptych by Argentinian artist Miguel Viladrich Vilá entitled “My Funeral.” The skeleton holds a tiny bouquet of roses and, surrounded by characters from Vilá’s own life, seem more reassuring than frightening.

The exhibition is free to CAM members and children under five. General admission is $16 for adults and $8 for students and senior citizens, except on Thursday when it is free to the general public after 5 p.m. CAM offers a free public tour of the exhibition every Thursday at 6:30 p.m. Catch it while you can.

Cincinnati native Carol Ellison recently returned home after living and working for the past 30 years as a writer/editor in New York and Boston. These days she plays with paint and pencils, as well as word processors, and occasionally mashes up all of them to teach writing to kids in a method she calls “art of the story.” In fact, you can reach her at artofthestory100@gmail.com.