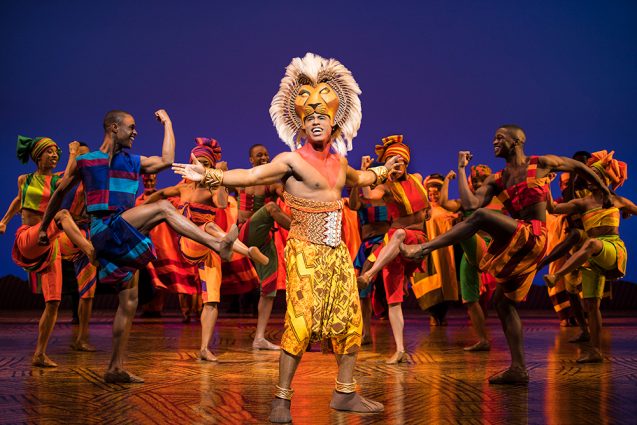 I have to admit, what I got and what I expected were two very different things after attending the opening night of Disney’s “The Lion King” at the Aronoff Center, courtesy of Broadway in Cincinnati.…

I have to admit, what I got and what I expected were two very different things after attending the opening night of Disney’s “The Lion King” at the Aronoff Center, courtesy of Broadway in Cincinnati. I expected the plot of the ’90s animated feature of the same name, with classic staples like “Hakuna Matata” and “Circle of Life” and costumes reminiscent of the characters I had seen in the theater when I was much younger. Those things were there, to be sure, but my mind was absolutely blown away by this creative take on the classic. If you haven’t experienced it yet, I believe it will do the same to yours.

The core story, along with the music and lyrics written by Tim Rice and Elton John, were all there. What was new to me were the additional pieces of music written just for the Broadway show. Pieces like “Shadowland” and “They Live in You” are exclusive for the theatrical version of the story, but absolutely stand with (and in my opinion surpass) the more familiar pieces from the ’90s.

The original production was the brainchild of Julie Taymor, who originally created the costumes, masks and puppets as well as writing some of the additional music and directing. She’s an accomplished and visionary director behind films such as “Frida,” “Across the Universe” and my personal favorite, “Titus” (based on Shakespeare’s “Titus Andronicus”).  Being familiar with her work, I was interested to see how it translated to a Disney product. The result was something truly creative and brilliant that fleshes out more of the core story and also adds a much-appreciated infusion of traditional African music and culture.

The cast was truly remarkable! The absolute talent of the actors was on full display through their songs, dialogue, dancing and puppetry (I’ll explain that more in a minute). I would be hard pressed to say any one performer was stronger than the others, because they were all phenomenal, but I did want to highlight two in particular. The first is Gerald Ramsey, who plays Mufasa. It’s hard to compete with the great James Earl Jones, who originally played the part in the animated classic, but Ramsey excelled. His presence was able to convey the complexity of the well, showing strength and courage, while also displaying compassion and humility. His voice encapsulated the character perfectly. What amazed me most about Ramsey is that he does not come from a classic Broadway pedigree. He landed the role in an open tryout in Honolulu and had no acting or singing training, and hadn’t even seen a Broadway show. In fact, he tried out almost as a dare from a friend!

The second performer I wanted to highlight is Celina Smith, who portrayed Young Nala at the performance I attended. She absolutely held her own with the adult performers, both in action and voice, and skillfully portrayed her character while being absolutely adorable doing it. I was incredibly impressed by her performance, and she’s only 9 years old!

In saving the best for last however, I have to shower praise upon the costume design and puppets. I was incredulous going into this show having seen “Beauty and the Beast” where the characters wear costumes akin to what you would find at a Disney Theme Park. That was not the case here.  Costumes did not try to hide the human actors behind them, so much as they created an apparatus around them, creating a suspension of disbelief where you lose sight of the actors themselves. It’s truly ingenious design and incredibly creative and earthy. Even with a character like Timon the meerkat, you can clearly see the actor controlling the puppet, but through the puppetry and performance, you begin to lose sight of the actor and just see the meerkat.

I was able to bring all of my kids and my wife to the performance and we were all truly awed by the show. I would highly recommend this to families or adults by themselves equally. Everything about it was incredible, so make sure to catch it while it is in town, Cincinnati! “The Lion King” runs through February 2 at the Aronoff Center.