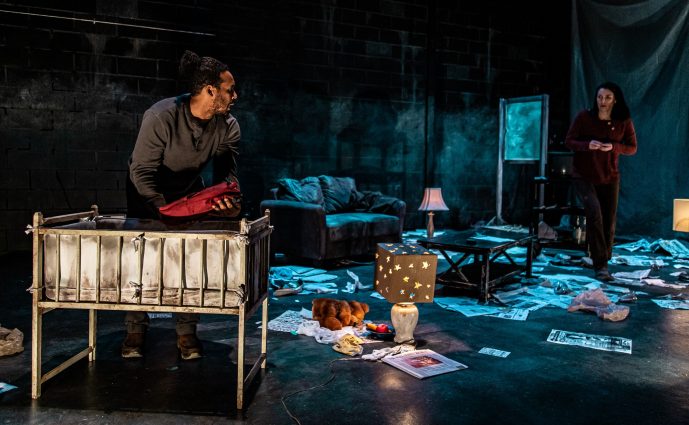 'In the Night Time' taps a deep well of parental anxiety

A child is born, and a man and a woman do their best. That's the gist of Nina Segal's "In the Night Time (Before the Sun Rises)," which made its U.S. premiere at Know Theatre…

A child is born, and a man and a woman do their best. That’s the gist of Nina Segal’s “In the Night Time (Before the Sun Rises),” which made its U.S. premiere at Know Theatre of Cincinnati this weekend. The child cries. And cries. And cries. The ever-present wailing is only audible to the audience between scenes, and it grows in intensity over time. The man and woman speak mostly toward the fourth wall rather than one another. The result puts distance between them while giving us more insight into their anxieties.

Those anxieties are palpable. The scenery is proof enough of that. They live in a small apartment with bare walls. Old newspaper litters the floor. Terrifying news permeates the television, their phones and even the streets nearby. Anyone who has spent several nights with a baby that won’t stop crying could tell you that it feels like the world is ending. The poor souls at the center of “In the Night Time” have to take it a step further. Their world may actually be falling apart.

Brandon Burton and Elizabeth Chinn Molloy both give note-perfect performances. In brief flashbacks and moments of hope, they radiate warmth and charm. As the night wears on and the cracks in their lives and the world at large grow, the desperation drips off of them like sweat. The chemistry between them fits the bill perfectly at every moment. For the most part, that means unbearable tension. But in those rare glimpses of better times, you get a sense of the joy the two have shared.

The night rolls on. Each situation deteriorates. By the end, it feels almost impossible to find a way out, and maybe it is. Maybe, as the two fear, they’ve let the world fall too far without doing anything to stop it. But maybe not. I won’t describe the glimmers of hope buried in this succinct, pithy play. They’re best discovered on your own. Suffice it to say that Andrew Hungerford’s scenic and lighting design, along with Douglas Borntrager’s sound design, lead the way in a release of tension you won’t soon forget.

“In the Night Time (Before the Sun Rises)” runs through February 8 at Know Theatre. Take some time with it. Digest it properly. Parents, be warned: the apocalyptic dread you will most likely feel will be eerily familiar.