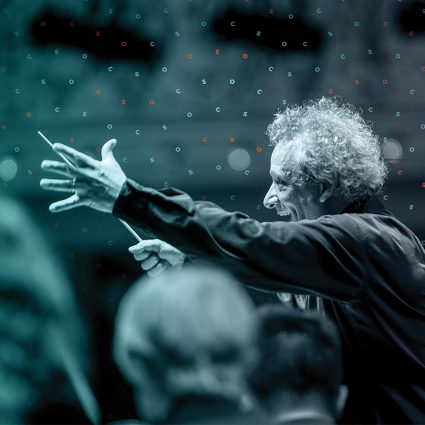 George Gershwin received a standing ovation at Music Hall Saturday night following his solo piano performance of his American classic, "Rhapsody in Blue" on a modern Disklavier piano that responded to his every “touch." Gershwin,…

George Gershwin received a standing ovation at Music Hall Saturday night following his solo piano performance of his American classic, “Rhapsody in Blue” on a modern Disklavier piano that responded to his every “touch.” Gershwin, who last appeared with the Cincinnati Symphony Orchestra in 1927, joined a stellar lineup of other composers and musicians from the CSO’s past and present who gathered at Music Hall this weekend to pay tribute to the CSO’s 125 years of musical history.

And what a tribute it was!

It was an anniversary party unlike any other, alive with thundering applause and a magical irony. While Music Director Louis Langrée took bows with other featured performers of the evening, Gershwin (who died in 1937) was visible only in the movements of the keys, hammers and pedals of the Yamaha Disklavier acoustic piano he “played.”

The concert, which will be repeated today (Sunday) at 2 p.m., showcases the once and future artistry of the music world, as much as it celebrates the history of the legendary orchestra itself. It packs the stage with a musical battalion that includes the 90-member CSO and members of the May Festival Chorus.

The concert opened with the world premiere of “Passages in Time,” a piece by former CSO principal bassoonist and composer William Winstead, commissioned by the CSO especially for the celebration. It incorporated motifs from musical history and featured the Cincinnati Youth Orchestra performing alongside the CSO in a glorious tribute to its future as well as its present and past. Winstead performed with the CSO for 31 years before retiring two years ago to compose. His colleagues and fans welcomed him back Saturday with a standing ovation at the conclusion of the piece.

Following “Passages in Time,” the solemn “Exil!, Op 25 for High Strings” evoked the sadness of former CSO music director Eugène-Auguste Ysaÿe, who came to Cincinnati after leaving his native Belgium in the aftermath of World War I. He was known as “king of the violins” and composed the work in 1918, the last year of the war — the year he also  became the CSO’s music director. “Exil!” evokes the sadness of having to leave his native country. It is performed using only violins and violas. On Saturday, the musicians stood in reverence to Ysaÿe’s intent as they performed the piece on stage.

Pianist Aaron Diehl picked up the pace with an energetic performance of Duke Ellington’s “New World a-Comin’” that set the stage for Gershwin. Ellington recorded “New World a-Comin’” with the CSO in 1970 under the direction of Erich Kunzel. Often considered to be an homage to “Rhapsody in Blue,” it was composed after Gershwin’s death in 1937 to celebrate equality and racial justice, as well as the composer’s contribution to the jazz age.

Saturday night’s concert marked the 10th time the CSO has performed “Rhapsody in Blue,” although it is the only time they have performed it “with” Gershwin at the piano since 1927, then under the direction of Maestro Fritz Reiner.

The second half of the concert featured Daniél Bjarnason “Collider,” a work that was commissioned by the CSO and saw its world premiere in Cincinnati at the Music NOW Festival in 2015. From the slow solemnity of its opening notes, through intermittent tweets, chines, bangs and claps, a chorus of strings builds the tension through the tones to evoke the sense and activity of a futuristic particle accelerator from which it draws its name.

Alexander Scriabin’s sweeping “Prometheus: Poem of Fire” concluded Saturday’s concert with a hail of orchestral and vocal tones, accompanied by an overhead light display in an artistic translation of the Greek titan Prometheus’ mythical gift of fire to humanity after stealing it from the gods. A “light organ,” keyed to illuminate the stage in color as various tones were struck, accompanied the piece at its 1931 world premiere in Moscow. The work was performed at the 1931 May Festival and, for this concert, the May Festival chorus gathered again on stage to reprise it. But this time, the light and colors were the creation of video artist Tal Rosner who created a dazzling overhead display to accompany the orchestra and Ukranian pianist Vadym Kholodenko.

Cincinnatians have one more opportunity to experience this historic concert. The CSO continues its celebration today (Sunday) with a reprise of these performances at 2 p.m.

On January 26, winners of the 62nd annual Grammy Awards will be announced. The CSO’s album, “Transatlantic,” which features Gershwin’s “An American in Paris” alongside works by French composer Edgard Varèse and Russian Igor Stravinsky has been nominated for Best Orchestral Performance. On top of that, the Cincinnati Pops Orchestra’s “American Originals: 1918” has been nominated for Best Orchestral Compendium.

Cincinnati native Carol Ellison recently returned home after living and working for 30 years as a writer/editor in New York and Boston. These days she plays with paint and pencils, and occasionally mashes them up with her word processor in a method she calls “art of the story” to teach writing to kids of all ages. In fact, you can reach her at artofthestory100@gmail.com.