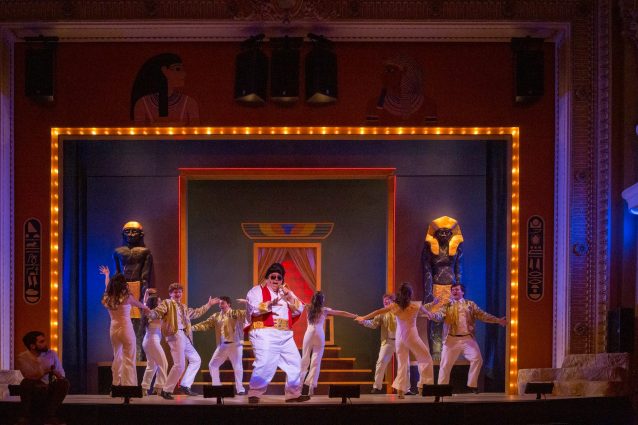 One of my favorite venues in the Greater Cincinnati area is The Carnegie. A beautiful space located in Covington, the venue produces some of the best shows I’ve seen in the region. Naturally, when I…

One of my favorite venues in the Greater Cincinnati area is The Carnegie. A beautiful space located in Covington, the venue produces some of the best shows I’ve seen in the region. Naturally, when I found out they would be presenting “Joseph and the Amazing Technicolor Dreamcoat,” I knew I wanted to see their take on it.

For the unfamiliar, the play deals with the biblical story of Joseph, including his brothers’ betrayal and his rise to prominence. The story is told with the help of a Narrator and 99% of the lines are sung. There are classic themes of jealousy, struggle and redemption interwoven with both dramatic and comedic moments that are guaranteed to keep audiences engaged.

As I sat with my wife and our out-of-town friends and enjoyed the show, we were all amazed by the amount of diverse talent in the ensemble cast. Frankie Chuter as the titular character was a new face to me, but his tenor voice rang out across the theater as clear as a bell. His vocal decisions, facial expressions and dancing made him a joy to watch. I was also very impressed by the younger members of the cast. They never missed their marks, were deliberate in their non-verbal expressions and managed to keep the show moving seamlessly.

The familiar faces I knew brought their A-Game. Sean Mette pulled double duty as Joseph’s father Jacob and Pharaoh. His comedic choices definitely made him shine. I laughed heartily numerous times, probably louder than I should have. Also, there was the incomparable Tia Seay as the Narrator. I’m always on Tia watch due to how amazing her voice is. This time, I was pleased to hear the diversity in her vocal. She would go from round tones to operatic voice (COME THROUGH FIRST SOPRANO) and then sneak a little church into it that would make me do a Baptist quicken from time to time.

What most impressed me about this production was the amount of diversity on stage. Joseph’s brothers were comprised of men and women across the racial spectrum which was a reflection of the cast as a whole. Additionally, the message of holding on to your dreams was very personal. In the artistic community, many of us have felt discouraged on the road to turning our dreams into reality. “Dreamcoat,” however, gives us hope that we can make them happen. It doesn’t have to be creative either. Any dream will do.

Andre DuBois is the Engagement & Event Coordinator at ArtsWave. Outside of that, he is also a songwriter, producer, musician and protector of soul music and African American culture.