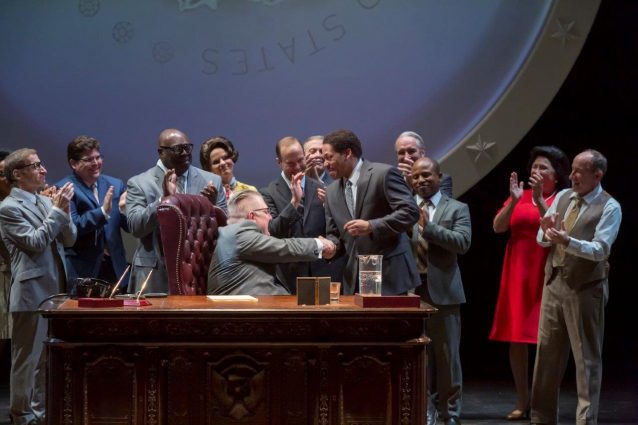 The cast of Cincinnati Shakespeare’s production of “All the Way”
Photo credit: Mikki Schaffner Photography

Power and politics at play in 'All the Way'

Cincinnati Shakespeare Company’s production of "All The Way" is an intense experience of Shakespearean proportion. You don’t have to be a history buff to appreciate this show. It is big. It is mythic. The show…

Cincinnati Shakespeare Company’s production of “All The Way” is an intense experience of Shakespearean proportion. You don’t have to be a history buff to appreciate this show. It is big. It is mythic.

Winner of the 2014 Tony Award for Best Play, playwright Robert Schenkkan takes us behind the scenes of this volatile period in United States history that still has meaning for us today. Only 50 some years ago, less than a lifetime ago for some, the United States struggled over the same federal rights vs. states’ rights we are brawling over today. Taking place from 1963 to 1964, “All The Way” covers the first year of President Lyndon Baines Johnson’s presidency.

Clear direction (Brian Isaac Phillips) keeps a steady pace that drives the plot and relationships forward, with design that engages and supports. The projections and live camera work in particular help bring to life the importance of commanding TV attention in that time period.

LBJ, masterfully portrayed by Jim Hopkins, uses political savvy and coercion to get the Civil Rights Act of 1964 passed and to win the Presidential election against Republican candidate, Barry Goldwater. The intrigue is watching how he does it: with bluster, rough charm and brute force. LBJ declares that “politics is war” and make deals with people that will “extract his pound of flesh.”

This “accidental President” strategizes what needs to happen with House and Senate leaders. A southerner, LBJ butts up against the other Southern legislators in their attempts to sabotage the civil rights legislation. As the Southern committee leaders casually talk about how to bury the bill, they ignore the African American men who are shining their shoes and serving them bourbon, discounting their humanity.

LBJ commands Senator Hubert Humphrey (Brent Vimtrup) to bring the liberal congressmen and civil rights groups in line, and to work out a compromise to integrate the Mississippi Freedom Democratic Party (MFDP) with Mississippi’s all-white delegation at the Democratic National Convention. We see Senator Humphrey struggle with his own desires to do right, to follow instructions and to fulfill his own ambitions.

Dr. Martin Luther King, Jr., thoughtfully and charismatically played by Sylvester Little, Jr., works from his end to get the support of the Civil Rights Act, although it doesn’t deliver on everything that his various coalitions had anticipated. We see MLK using his political savvy and insight to bring together the disparate members of the Civil Rights movement over Freedom Summer and MFDP.

The 15 ensemble cast members play multiple roles. They do a terrific job of creating clear characters with humanity and smarts. The characters find paths through contentious political minefields, veiled threats and power plays to reach their goals. The question resounds throughout the entire play, “When is doing what’s right sacrificed for what is necessary?” The triumph of the ending is dimmed by the foreshadowing of the crises to come, for both LBJ and MLK. Clocking in at about three hours, this tremendously compelling production is an epic that will make you think, reflect, question and feel.

Kari E. McLean is a returning wanderer getting reacquainted with the area and its exemplary arts programming. A theater aficionado, a coffee addict, and a Fiona fan, she keeps turning up in spots all over the Tri-State like a good penny.