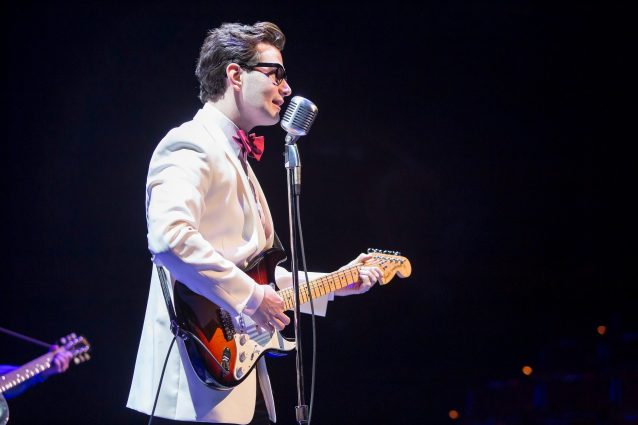 The music lives on in 'Buddy'

So, right off the bat I want to say that “Buddy: The Buddy Holly Story” is showing at Cincinnati Playhouse in the Park now through February 16. I want to stress this point because the…

So, right off the bat I want to say that “Buddy: The Buddy Holly Story” is showing at Cincinnati Playhouse in the Park now through February 16. I want to stress this point because the show was an absolute blast and I highly recommend catching it before it’s gone. Seriously, this is one you’re going to want to see!

I wasn’t quite sure what to expect going to the opening night performance of the show. I’m familiar with Buddy Holly’s music and felt I knew a little bit about the subject prior to the performance. What was incredibly unique about this production to me was how it was a perfect hybrid of musical theater and a rock and roll concert. And, let’s face it, when dealing with someone like Buddy Holly, who blasted onto the scene during the golden age of rock and left an indelible impact on the genre and its descendants, there’s no better way to handle it. The play begins in a radio station studio in the aftermath of “The Day the Music Died.” From there, we travel back to witness Holly’s ascension to rock and roll stardom in just 3 short years.

The play does not go to great lengths to flesh out much of Holly’s backstory. Mainly, it sets the time and place for pivotal moments in Holly’s career and lets the music tell the story. Showcasing over 30 songs from Buddy Holly’s career, I truly appreciated how this production, rather than get into the minutiae often found in biopics, embraces the songs and showmanship of Buddy Holly. Rather than gloss over the songs that captivated generations, it revels in them and spends abundant time letting them tell the story.

The cast is comprised of seven extraordinarily talented actors and musicians who, aside from the performer portraying Buddy Holly, all played multiple parts. Even more amazingly, they played multiple instruments. They were all incredible and showcased not only their immense talent, but also an absolute joy in what they were doing. The sense that they were not just acting but jamming together and having a blast was palpable. I would be remiss in this review not to draw special attention to Andy Christopher, who portrayed Holly in the performance. I was not surprised to see that he was the music director for the production as well, as every aspect of his performance showcased not only his immense talent, but a deep love for the subject and the music.

The last 30 minutes of the show transformed into a full-fledged interactive rock concert, complete with performances by the Big Bopper and Ritchie Valens. Like any great rock and roll concert, the audience was gifted with an encore. As a parent, I love to bring one of my kids with me to these performances so I can gauge the interest level of children for other parents like me. For this show, I brought my 11-year-old son, who has increasingly begun to really delve into music. I am absolutely pleased to tell you he thoroughly enjoyed the show. I later caught him downloading some of the songs onto his iPod. So again, the show runs through February 16 at Cincinnati Playhouse in the Park. Make sure to catch it while it’s in the Queen City.