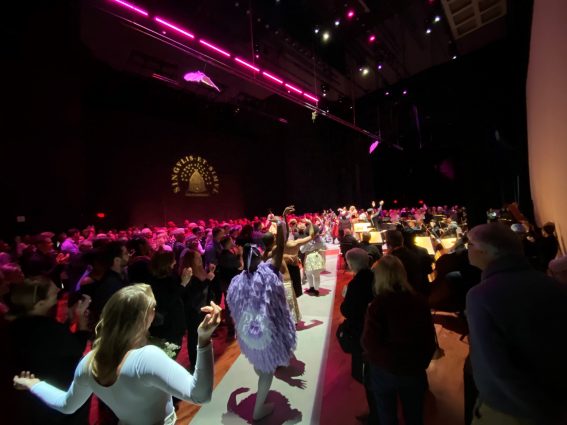 'Singulis et Simul' shows the boldest side of the CSO

Walking home from Music Hall after Wednesday night’s CSO Proof performance of "Singulis et Simul," I saw some of my colleagues sitting at the bar in Low Spark on 14th. I went in to chat…

Walking home from Music Hall after Wednesday night’s CSO Proof performance of “Singulis et Simul,” I saw some of my colleagues sitting at the bar in Low Spark on 14th. I went in to chat and to explain what I had just seen two blocks away.

I used phrases like “Parisian vogue dancing” and “several deep, deep splits” and “tall, black, shirtless Thomas Jefferson.” I was dancing in a way that did not at all demonstrate the dancing I had just seen. I pantomimed catwalking and jazz hands and twirling. At the end of it, the guy on the end, White Claw gripped anxiously in his hand, shouts “I thought you said you saw the symphony?” The bartender asked me to leave.

In fairness, I can’t say that’s precisely what I did see. Performers from Studio House of HMU (Paris/Baltimore/Cincinnati) brought feminine vogue gallantry to the stage. The symphony performed classical canon that must have been the vogue of its day: energetic strings, rising crescendos, resonant percussion.

Indeed, the symphony was there, ever-present, stalwart and indelible, atmospheric and ambient. In these collaborations there is almost a preordained feeling to the music, as though pure excellence is a given. Led by conductor Keitaro Harada, they played energetically through several Italian and French Baroque hits. I say hits because these were surely the club bangers of their day. To Harada’s credit, he conducted barefoot and with so much energy I thought he might leap onto the catwalk himself at any moment.

The visual and experiential spectacle of “Singulis et Simul” is what elevated this performance into rarified company. The name loosely meaning “together but different” in Latin, it’s as apt a name as any. The performance featured French “vogue” dancers, which I have learned means many things. It is a dance form that is almost purely performative. It is meant to be watched, to be moved by and aroused by. It is not as much overtly sexual as it is shot through with sensuality and vigor, striated with glamour.

After being led backstage, we find two catwalks painted on the floor, crossing in an X. The audience fills in all the white space of the X except for the lines themselves. The dancers vogue down these lines, while a camera from above projects on a screen of stunning immensity. There are tassels and glittering marching band uniforms. There are frilly neck chokers and at least one colonialist gray wig. The performers are close enough to touch and, if you are lucky, they will touch you.

Any lingering doubt about the sheer audacity of the Cincinnati Symphony Orchestra in their programming and daring has been smothered. Studio House of HMU Director Frédéric Nauczyciel, a heavyweight in the voguing arena, delivered glamour to the stage.

For the uninitiated, CSO Proof is a collaboration concept the CSO is putting on in three parts. The first, “American Perspective,” was in November. The third and final, “Surrealist El Tropical,” is on Wednesday, April 22, 2020. The performances usually involve creative ways of being close to the music, sitting on the stage and experiencing the CSO from a sharply different perspective.

I must also applaud the Cincinnati arts community, including the CAC who co-presented the performance. This whole experiment only works because we have a fervent community here to sell out performances on Wednesday nights. To fly in artists from Paris and drown them in adoring applause. To trust ourselves to trust the art. It’s never been a better time to be here.