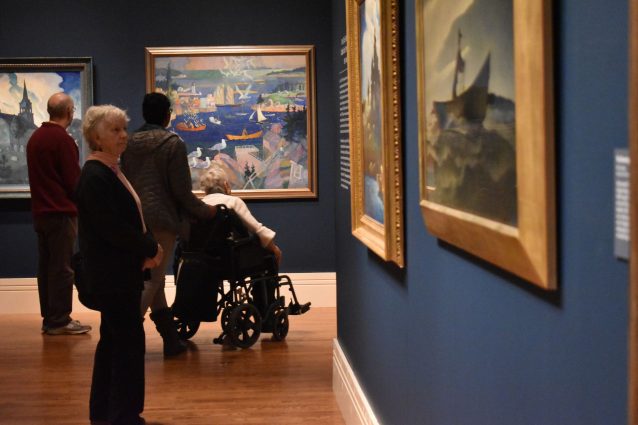 'N.C. Wyeth: New Perspectives' is a dazzling display of imagination and realism

The name Wyeth is well known in the art world. For three generations, it has dominated American art. Cincinnatians now have a rare opportunity to see and appreciate the work of the family patriarch, Newell…

The name Wyeth is well known in the art world. For three generations, it has dominated American art.

Cincinnatians now have a rare opportunity to see and appreciate the work of the family patriarch, Newell Convers Wyeth, in the exhibition “N.C. Wyeth: New Perspectives,” currently at Cincinnati’s Taft Museum of Art. Co-organized by Pennsylvania’s Brandywine River Museum of Art and the Portland Museum of Art in Maine, the exhibition is the first major retrospective of N.C. Wyeth’s work in more than 50 years.

The 50 paintings in the exhibition are but a sample of the more than 3,000 paintings and illustrations N.C. Wyeth produced during his lifetime. But what a sample it is! “N.C. Wyeth: New Perspectives” allows viewers to observe the many artistic traditions and influences Wyeth brought to his art.

Wyeth was a master of American realism and his illustrations of the action/adventure stories of the 20th century helped spawn the imaginative realism movement of the 21st. His influence can still be seen in the illustrations of modern sagas like “Star Wars,” “Game of Thrones” and “Lord of the Rings.”

The exhibition unfolds in more or less chronological order. It begins with a sumptuous display of the illustrations for which he is so well known, and carries viewers through the various styles and developments that influenced his later work.

Wyeth’s earliest success — an illustration of a cowboy atop a bucking bronco that he produced in 1903 — introduces the exhibition. The illustration, done in 1903 when he was only 20 and still a student of master illustrator Howard Pyle, earned the cover of “The Saturday Evening Post.” Pyle urged Wyeth to leverage the success, travel West and paint the scenes that he encountered. These action-packed canvases he produced memorialize those who opened the American frontier — highway laborers struggling to dig through snow-covered mountain passes, cowboys in chaps and hats competing in rodeo arenas.

Each painting tells a story and it was that narrative quality that, in 1911, garnered the attention of New York publishers Charles Scribner’s Sons which hired him to illustrate “Treasure Island,” Robert Louis Stevenson’s novel of pirates on the high seas. In the large black-and-gray illustration that Wyeth produced for the end-paper (inside cover) of “Treasure Island,” we see the bawdy brigands — chins thrust forward and jaws set as they cross a beach beneath a yellow-gold sky, brandishing picks, shovels, muskets and swords.

Wyeth would go on to illustrate more than 100 action-adventure books, including many more in Scribner’s Illustrated Classics series.

Gazing upon these classics, it is easy to invent your narrative around the images and the Taft invites viewers to do so as we find Jules Verne’s Captain Nemo staring across the room at Washington Irving’s “Rip Van Winkle.” But for those interested in exactly how Wyeth developed the work, the museum thoughtfully provides the quotes from the text that fed Wyeth’s creative vision.

For all his success as an illustrator, Wyeth sought to be equally as well-known for fine art. “New Perspectives” celebrates these lesser-known efforts with examples of his personal work — paintings Wyeth produced from his home and studio in Chadds Ford, Pennsylvania and his summer home in Port Clyde, Maine.

Described in the exhibit as “A Time of Transformation,” these paintings reveal a mastery of color and form, and range in subject from the delightful to the mysterious and deeply troubling. Many meld Wyeth’s strong sense of narrative to their subject matter.

A massive canvas, titled “In a Dream I Meet General Washington,” portrays the first President in his colonial blue uniform bending down from his white steed to greet the approaching Wyeth, dressed in his artist’s work clothes. Its playfulness appears in stark contrast to the illusory “My Mother,” which portrays his mother, Henriette, in her kitchen. Its angled patterns of blues and grays is sadly mystical and impressionistic in style.

The artist Winslow Homer also influenced Wyeth’s technique, which can be seen in Wyeth’s scenes of life on the rugged Maine coastline. Wyeth worked in egg tempera for many of these paintings, using pigments and dyes he helped develop with the DuPont company. We see the colors that resulted most notably in “Island Funeral,” which dazzles the eye with warm tans and deep blues, greens and teals.  The painting recalls the funeral of a fisherman that Wyeth and his family witnessed from porch of their home in Port Clyde, Maine. But the point of view of the painting is aerial, which gives it a fascinating perspective that is almost surreal.

“Island Funeral” represents a high point in Wyeth’s efforts to be recognized as a fine artist. Painted in 1939, it was the centerpiece of a one-man show — Wyeth’s first and only — at the Macbeth Gallery in New York City. It is the final painting in the exhibition, marking a crowning achievement in a remarkable life. The artist died suddenly in an auto accident in 1945. “N.C. Wyeth: New Perspectives” continues at the Taft until May 3. During its stay, the museum will be hosting special exhibition tours led by docents, curators, and artists.