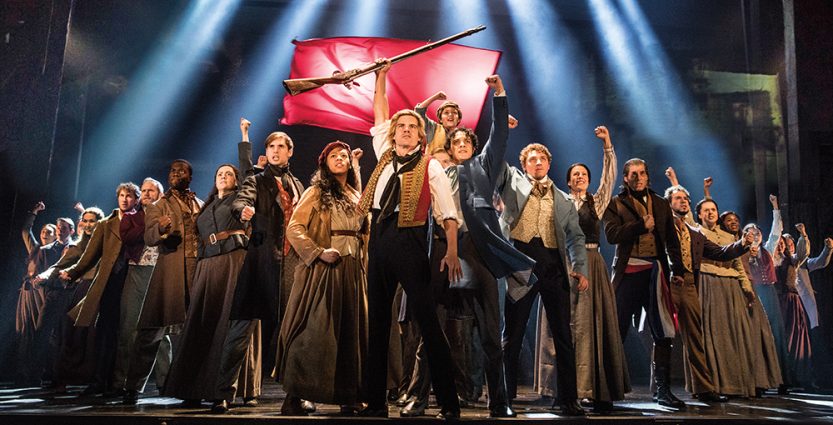 Premiering on Broadway in 1987, "Les Misérables" has become one of the longest running and most successful musicals of all time.  Over the years since it premiered, the show has been experienced by over 70…

Premiering on Broadway in 1987, “Les Misérables” has become one of the longest running and most successful musicals of all time.  Over the years since it premiered, the show has been experienced by over 70 million people, translated into multiple languages, and even spawned a motion picture in 2012. I had the good fortune to see the show this week at the Aronoff Center as part of Broadway in Cincinnati’s 2020 season. At its basest level, this is a story of hope amidst darkness and desperation. The audience is drawn into the fiber of the characters’ struggles, passions and journeys toward redemption.

Growing up an ’80s/’90s kid, I did not have much experience with “Les Misérables.” I remember seeing the logo, a haunting image of a child in front of a tattered French flag. I knew it was based on the book by Victor Hugo, which I had never read. And I knew that it was insanely popular. My mother was an avid fan of anything Andrew Lloyd Weber-related, so I had seen countless performances of “Phantom of the Opera,” “Jesus Christ Superstar,” etc. but never “Le Miz.”  In 2012, the movie premiered and generated a bit of buzz due to the casting. That’s when I took a leap (once it was on DVD) to give it a watch. I absolutely fell in love with the story and production. Consequently, this review was one I was extremely excited for, because this would be my first time seeing the production live on stage.

To say I was blown away is an understatement. This is a musical performance on the absolute highest level and of the highest caliber. From the opening moments until the curtain call, the audience is completely engrossed in the story. Every aspect of the production, from the lighting — sometimes dim, sometimes shining from behind the actors to silhouette them — to the costumes, every aspect pulls you in and enriches every part of the show. There are over 5,000 unique articles of clothing used during the performance!

Based on Victor Hugo’s 1862 novel, “Les Misérables” follows the life of Jean Valjean. We meet the character as prisoner #24601, as he is paroled from prison labor after 19 years. His crime was stealing a loaf of bread to feed his sister’s starving family. The story follows his trials as he seeks to regain his life, only to wear his history as a convict like a scarlet letter. Broiling with frustration and anger, he is given another chance, and through the selfless generosity of a priest, he begins to build his life anew.

The story also follows Fantine, a young single mother, attempting to provide for her child. Through a series of misunderstandings, then regret, and then finally redemption, Jean Valjean comes to care for Fantine’s child, Cosette.

The events of the story propel the audience forward into France’s “June Rebellion.” Romance, compassion, inner-turmoil, suspense, action, rebellion and comedy are woven together effortlessly.  No wonder this is among the longest-running and most successful musicals of all time.

One of the most amazing facets of the show for me was the talent of the actors on full display. Valjean and Javert were portrayed by Patrick Dunn and Preston Truman Boyd, respectively. Both were amazing, and the power of their voices was astounding. I’m not as learned with regard to the technical aspects of singing, but my wife, who was my date, is. She commented multiple times at how impressive a range they both had. So many talented and strong performances by the entire cast, and every character was represented well. Fantine was equally fantastic as portrayed by Mary Kate Moore. The standout for me had to be Phoenix Best who portrayed Eponine. Not only does Eponine have one of the most powerful and tragic stories of the production, Ms. Best was truly amazing in her portrayal through her voice and acting talent. But I must reiterate that every member of the cast did a phenomenal job and completely became their characters.

An honorable mention also has to go to the set itself. I was truly astounded at how creative and functional the set pieces were, from the huge barricade erected in Act 2 to the amazing uses of light, projectors and design to enact the passage through the sewers by Valjean.

Overall, it was an amazing performance and incredible experience. I highly recommend going to see one of the remaining performances during its run here in the Queen City until February 23.