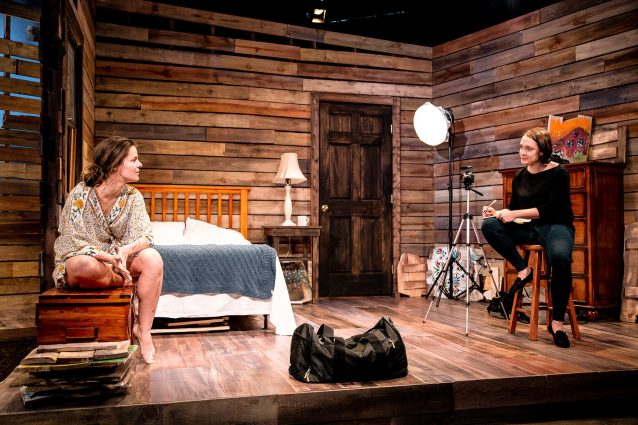 Okay, bliss is the wrong word. "Alabaster" is a darkly humorous, and occasionally harrowing, celebration of the resilience of women in the face of trauma. Audrey Cefaly’s play is set in the town of Alabaster,…

Okay, bliss is the wrong word. “Alabaster” is a darkly humorous, and occasionally harrowing, celebration of the resilience of women in the face of trauma. Audrey Cefaly’s play is set in the town of Alabaster, Alabama, at an old farm house occupied by June (Maggie Lou Rader) and her goats, Weezy and Bib. Weezy, a self-aware goat played by Keisha L. Kemper, serves as a narrator for the audience and moral support for June, while caring for her aging mother, Bib, played by Jodie Beth Linver. The audience is expected to suspend their disbelief and accept that the goats, both played by human women, are goats, as explicitly stated in the first scene of the play.

The three of them are visited by Alice (Kelly Mengelkoch), a famous photographer from New York City, after June responds to an ad seeking subjects for a new project focusing on women with scars. Here we get a first glance of June’s fiery personality, which is irreverent and, at times, combative. It is clear that although June wants to work with Alice, she feels threatened by the prospect of letting her guard down, which leads to a rocky start between the two women. Their resulting relationship, however, is an emotional journey full of trauma, vulnerability, love, loss and recovery.

This play touches on a lot of topics in our culture that have been garnering increased attention in recent years, ranging from LGBTQ issues, to domestic violence, to PTSD and the emotional labor required of those closest to people struggling to recover from trauma. It’s an experience of watching four women on the same stage for two hours, all of them with their own unique experiences and problems, and their quest to relate to one another. There are very hard moments scattered throughout, including an intense nightmare flashback that transports the viewer right into June’s ghastly memories of the worst moment of her life.

It moved me to tears more than once. Honestly, I left feeling a bit exhausted. If you have a history of trauma yourself, you may find yourself feeling incredibly seen, or you may find it difficult to watch. Despite all the darkness, however, there is a sense of unmistakable optimism that there is light on the other side, and it asks the audience: are you ready to find it?

Alabaster runs at Know Theatre of Cincinnati from February 28 through March 21.