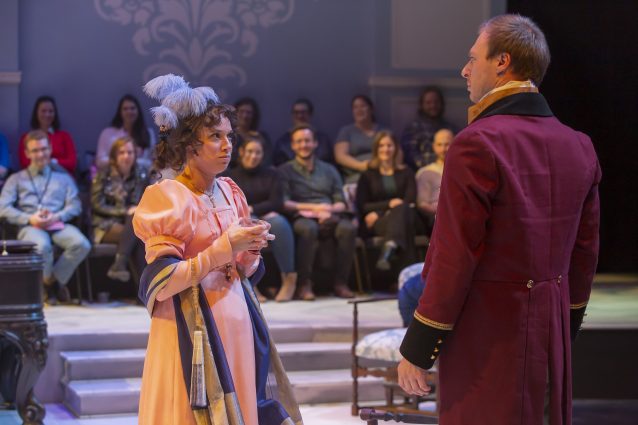 It is a truth universally acknowledged, that a theater goer in possession of a ticket will love this show!

Cincinnati Shakespeare Company’s opening night performance of Kate Hamill’s adaptation of "Pride and Prejudice" was electrifying. The performance takes place in the round (the first such performance in the new building), and the audience’s enthusiasm…

Cincinnati Shakespeare Company’s opening night performance of Kate Hamill’s adaptation of “Pride and Prejudice” was electrifying. The performance takes place in the round (the first such performance in the new building), and the audience’s enthusiasm was palpable throughout, including huge laughs and cheers. Cincy Shakes is already adding extra performances to meet demand as Janeites and Austen novices alike flock to see this delightful romp through the drawing rooms of Regency era England.

Both those new to “Pride and Prejudice” and those who know the story well  will find something to love in this new take. The story explores misunderstandings, human connections, societal pressures and the stories we tell ourselves. Several characters ask the others to “wish me joy” as they compromise and struggle in a world with limited options. Kate Hamill’s adaptation includes many of the lines and moments of the original text, while adding bawdy humor, farcical stage interactions and moments of unpolished bluntness. The script turns quickly from big laughs to moments of poignancy or despair, and is thought-provoking in its presentation of love.

This production looks absolutely fabulous. The costumes are beautiful renditions of the original period, with complementary pastels and stunning embroidery work. Slight alterations, such as feathers during the ball or a robe for an evening scene, make for effective indicators of set changes. The rotating stage is utilized to great effect, particularly in dancing scenes, which are delightfully choreographed. The dance sequences help illustrate the idea that all of the play’s interactions are a dance, with each party trying to anticipate and understand the other.

The cast of this production deserves endless praise. Each actor played multiple roles, and I loved how these casting overlaps caused me to think about the links between characters in new ways. Sara Mackie is a force as the unstoppable Mrs. Bennet, as is Miranda McGee as the enthusiastic Lydia. Caitlin McWethy brings forward a delightful rendition of Lizzy, which embraces both Lizzy’s intelligence as well as her playful and reckless qualities. Courtney Lucien is a dynamic and lovable Jane, and Jeremy Dubin brings compassion to the roles of Charlotte Lucas and Mr. Bennet. Grant Niezgodski’s Mr. Darcy’s transformation throughout the show from stiff and judgmental to warm with perfect comedic timing was a joy to watch. Several of the biggest laughs of the night went to Jude Walker for their surly Mary and puppy-like Mr. Bingley. Darnell Pierre Benjamin sparkles with some of the biggest character shifts of the production, between the aloof Miss Bingley, the fumbling Mr. Collins and the sly Wickham.

The staging of this performance made for a dynamic, farce-like atmosphere, and sitting on the stage made for great fun as the audience was invited to join in the emotions of the scenes. This production is an absolute blast. Catch the Bennets before they’re gone!

Caitlin Tracey-Miller loves museums, art, reading and freshly baked ginger cookies. She works at the Cincinnati Art Museum and enjoys going on adventures with her husband and toddler.