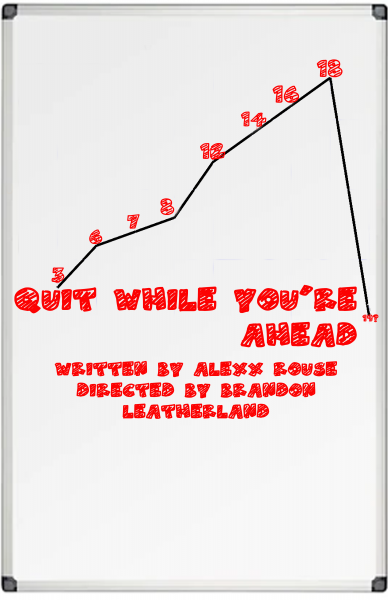 'Quit While You're Ahead' weighs the rational ethics of suicide

Before you begin this play, I warn that is discusses teen suicide. Teen drinking and occasional cursing is also prevalent. If you are a person that has suicidal thoughts, or has even attempted suicide, you…

Before you begin this play, I warn that is discusses teen suicide. Teen drinking and occasional cursing is also prevalent. If you are a person that has suicidal thoughts, or has even attempted suicide, you may find the content disturbing.

Set in rural Indiana, the set for “Quit While You’re Ahead” is minimal. Only a lawn chair, cooler, a ladder, chart stand and empty beer cans. Three teens appear with beers in hand, laughing and talking about graduation weekend. Chad is excited that to see what he will accomplish next in the world. Next to him is his best friend Jason and his girlfriend Jamie. Both are equally excited, but for a totally different reason.

A giddy Chad asks Jason if he is going to another graduation party the following weekend. Jason politely and happily explains he will not be able to attend, because he is going to kill himself. Shocked at the news, Chad doesn’t understand why his best friend would want to end his life just when it is getting started.

Jason pulls out a chart he created, showing that he has hit his peak in life already. Education is a challenge for him, but he is the school’s top quarterback and he is popular. He doesn’t want to lose that attention and affection from everyone by simply working everyday, maybe becoming a manager at a car wash before dying at the age of 40.

Jamie agrees with her boyfriend. She is the top cheerleader. They both believe it makes sense to take their lives while they are young and in their prime. They want people at their funeral to celebrate what they could have been instead of who they were.

Remembering my own high school days, trying to find something to sympathize with, I struggled. I was excited to graduate high school. I didn’t have the choice of whether I wanted to go to college or not, it was always a question of what colleges I wanted to go to. I couldn’t figure out why these teenagers would want to end their lives! Finally, I remembered my perspective of high school is not the only one that people have. Nowadays, teens are faced with bullying, perfection of grades, the pressure of drugs, popularity status, social class, work, taking care of their siblings and more. Everything I mentioned can lead to depression, anxiety and even suicidal thoughts. To some, it may seem easier to end it. How many times have suicides been reported of elementary, middle school and high school children? More than any of us would like to remember.

A dismayed Chad finally finds his words and courage to try to talk his friends out of committing suicide. He mentions to that their suicide plan may fail. He reminds them of their families’ histories. He even pulls out his own chart, showing opportunities where life can improve rather than worsen. Finding the right trade and skill to feel accomplished. Meeting new people, new friends and having new experiences. Finding your own place, and with it the freedom to live as sloppily or neat as you want.

At one point, Jason interrupts Chad to say that, even beyond high school pressure, there are global occurrences that can kill everyone. Chad responds by saying if that happens, at least you lived your best life. I loved that. I felt that. I do my best to exude that every day through a positive personality and spirit. This pandemic, and the killing of unarmed Black men and women in this world, can weigh heavily on everyone’s spirit. Chad stays positive and provides courage when his friends have no hope. We can all learn from that.

This also shines light on a conversation that we need to have with our friends, family members and children. Suicide is something that cannot be taken back. Talk to your friends when they seem down and check on them even when they are doing well. Listen to what they say to you. Provide sympathy and empathy if you can. It is better to be a listening ear while they are alive, than a mourner when they are gone.

Be sure to visit artswave.org/fringe for a full lineup of the 2020 Cincinnati Fringe Festival.

Marissa Staples is a Cincinnati published author and writer for “The Voice of Black Cincinnati.” She developed her love of arts from her mother, Kandi. Being a native of Cincinnati, she loves to travel. If she is not traveling, you can find her reading, writing, volunteering or drinking wine. Wine always brings smiles, friends and creative dialogue.