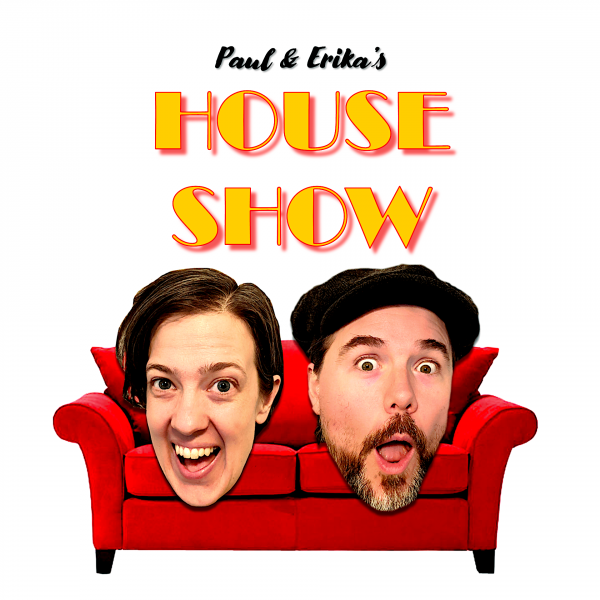 Theatre Mobile, consisting of partners Paul Strickland and Erika Kate McDonald, is no stranger to Fringe. They're a fixture at Cincinnati's Fringe Festival, winning Pick-of-the-Fringe in 2019. They're also familiar faces at Fringe Festivals in…

Theatre Mobile, consisting of partners Paul Strickland and Erika Kate McDonald, is no stranger to Fringe. They’re a fixture at Cincinnati’s Fringe Festival, winning Pick-of-the-Fringe in 2019. They’re also familiar faces at Fringe Festivals in Orlando, Saskatoon, Edmonton, Winnipeg and more. This year, their plans (like everyone’s) were thrown for a loop by the ongoing quarantine. When Cincinnati Fringe Festival went all digital, Paul and Erika reacted in their typical fashion. They learned video editing, wrote, and produced a show in about a month, and brought all the sincerity they could muster to it.

Being who they are, they could muster a lot. “Paul and Erika’s HOUSE SHOW” is a characteristically weird production. At its heart, it seems to revolve around fairly simple questions: What do we do now? How do we do this? Maybe most importantly, what does a production like this even mean in the unprecedented time we’re living through?

They answer those questions as best they can. But they also acknowledge, in several ways, that those questions are unanswerable. They reveal their uncertainty in their title cards. They start the whole thing over with a new direction several times. They speak directly to the camera, guiding the audience along their thought processes. They even briefly cede creative control to an eating utensil.

The result is outstanding and barely quantifiable. It’s unusual. It’s funny. It’s heartfelt. It’s meaningful. It’s a variety hour, featuring mini-sketches, meta-commentary, incredible storytelling and even audience participation. The high point comes when Paul and Erika speak directly to the audience. They share how hard it is to be a performer without a live audience. They share their view of how powerful it is to be in the same room with someone else, breathing the same air and witnessing the same story unfolding with the same emotions. They don’t try to wax professorial about how we can get through this, how it will all be better soon. Amid the hour of terrific entertainment they give, they simply offer a time to feel what we need to feel.

As a lover of live performance, I needed that. I’ll continue to need it until we can sit and witness, together, what these two and their peers have in store for us in the future. Thank you, Paul and Erika. And thank you, plate and spoon.

For a full list of this year’s digital Fringe lineup, be sure to visit artswave.org/fringe.