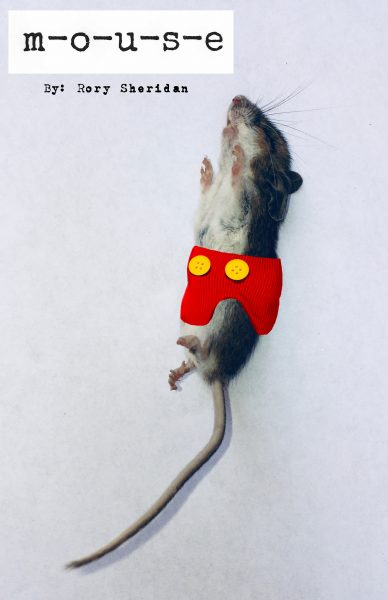 Zip-a-dee-doo-dah! Ink Blot, Inc.’s production of "m-o-u-s-e" tells the tale of a future archaeologist who returns to Earth and what he finds on his mission to archive the “old Orlando excavation.” This bizarre, hilarious, and…

Zip-a-dee-doo-dah! Ink Blot, Inc.’s production of “m-o-u-s-e” tells the tale of a future archaeologist who returns to Earth and what he finds on his mission to archive the “old Orlando excavation.” This bizarre, hilarious, and faintly twisted production uses a combination of video, old photographs, sketches and animation.

The Archeologist (wearing a space suit and helmet) finds “The Vault,” which belonged to a media megalith and corporate overseer, Walt Disney. Within “The Vault,” he discovers the lengthy memoir of the real mouse that inspired Walt Disney to create Mortimer Mouse, later to become Mickey Mouse. Proclaiming, “It wasn’t the man that made the mouse. It was the mouse that made the man,” the Archeologist reports on the autobiography to his AI Mission Assistant, Ariel.

The Mouse’s commentary actually does outline the real-life development of Mickey Mouse and his Mousedom. Writer/director Rory Sheridan, references Oswald the Lucky Rabbit and describes how The Mouse became an empire — all with from the peculiar perspective of the “real” 95-year-old mouse. The production has a comical take on Walt Disney himself. The Mouse is not a fan of how he was drawn. I was howling at the critique.

Filled with clever wordplay, the story weaves in references to Sonny Bono, “Hannah Montana,” public domain, The Beatles, “The Parent Trap,” “Alice in Wonderland,” “Pinocchio,” and cryogenic stasis. There were some allusions to Disney culture that went flying by me, I’m sure. Underneath this enjoyable, fast-paced surface, are some quick and highly-entertaining but substantial concepts about consciousness, humanity, illusion, information, and innovation. Since Mr. Sheridan is also an attorney, he incorporates the fact that copyright protection for Mickey Mouse will end (in 2024).

As an actor, Rory Sheridan is an engaging performer playing multiple roles: The Archeologist, Walt Disney, the Animator, and other characters. Mia Vera creates a coolly charming “Archival Cloud-Based Reporting Unit.” The original music by James Allen hits all the right notes, and picks up audio threads from “The Little Mermaid.”

If you’re in the mood for smart, informative, and though-provoking content wrapped in a strange and interesting bundle, you’ll delight in this production. Bibbidi-Bobbidi-Boo! Act now to fit this “m-o-u-s-e” tail into your schedule.

Visit artswave.org/fringe for a full lineup of the 2020 Festival!

Kari E. McLean is a returning wanderer getting reacquainted with the area and its exemplary arts programming. A theater aficionado, a coffee addict and a Fiona fan, she keeps turning up in spots all over the Tri-State like a good penny.