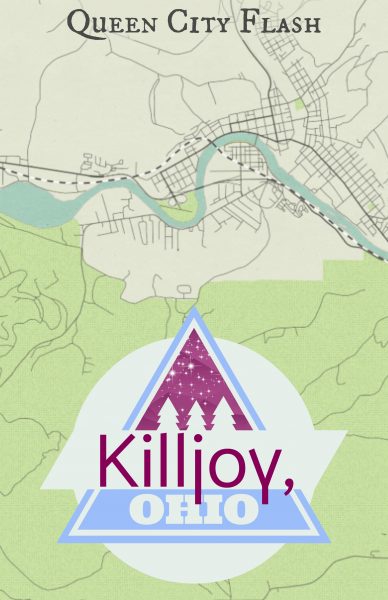 Queen City Flash’s entry into the 2020 Fringe Festival explores lost belongings, lost memories, and lost relationships. This show is weird, in the best sense of the word. It takes you into a strange world,…

Queen City Flash’s entry into the 2020 Fringe Festival explores lost belongings, lost memories, and lost relationships. This show is weird, in the best sense of the word. It takes you into a strange world, like the one Jordan takes Trey into.

Trey Tatum’s script takes us on an adventure of “two best stranger-friends” as they build a relationship and investigate their town, Killjoy, OH — formerly Killroy, OH.  A “kitty burglar,” Jordan (played by Jordan Trovillion) leads the way for Trey (played by Trey Tatum), to learn about the town’s own Bermuda Triangle. Over decades, the triangle has swallowed the Riverland Adventure Park, the Greyhound Race Track, the Palisades Drive-In. Documented by postcards that Trey has, he can’t find the physical evidence or memories that these places existed. While landscapes continually change, there is something unusual about the disappearance of these places in Killjoy. Jordan has evidence that it isn’t only places, but people — including the entire graduating Class of 1996 — and of whole previous versions of the town long ago.

Directed by Bridget Leak, the production makes the most of the Zoom format to establish connection between the characters. They physically push beyond the boundaries of the frame, using props and movement. The use of lighting is creative in the Zoom setting: flashlights, lighters and background colors of changing light help set time and mood. The music and sound effects further create the world of the play, an unanticipated bonus in the Zoom setting.

In this time of COVID-19 physical distancing, the ideas of loss, recovery and preservation echo while I watch this in solo time. I am reminded of what we’ve lost and what we have found. About two-thirds of the way through the production, the performers pause the story and talk about personal lost items. The story Trey tells about his Dad’s turquoise bracelet and his mission trip, Jordan’s story about losing track of clothing as she frequently traveled between her rural home and the Detroit suburbs, where she crashed on couches of friends. Everyone loses things. Having recently moved myself, I’ve also lost jewelry and clothing. As Trey says, “It wasn’t just the bracelet I lost; I lost my connection to the story.”

This thought-provoking production shows creates an eerie, intriguing, and suspenseful fairy tale ripe for these times.

Visit artswave.org/fringe for a full lineup of the 2020 Cincinnati Fringe Festival.

Kari E. McLean is a returning wanderer getting reacquainted with the area and its exemplary arts programming. A theater aficionado, a coffee addict and a Fiona fan, she keeps turning up in spots all over the Tri-State like a good penny.