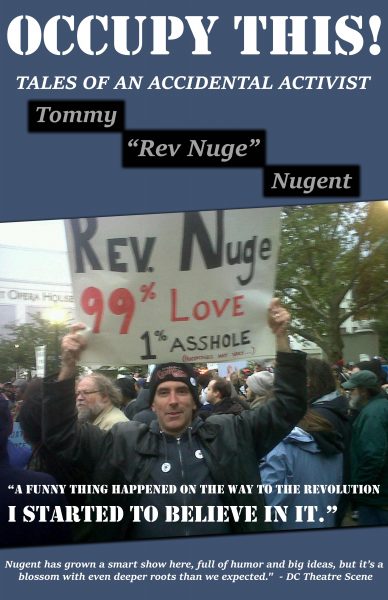 A remembrance of things past rings all too real today in 'Occupy This!'

A funny thing happened on my way to the virtual Cincy Fringe Fest Friday night. As I sat down to watch "Occupy This!: Tales of an Accidental Activist," echoes of the activism that inspired the…

A funny thing happened on my way to the virtual Cincy Fringe Fest Friday night. As I sat down to watch “Occupy This!: Tales of an Accidental Activist,” echoes of the activism that inspired the one-man show rose up from Cincinnati’s streets.

“Occupy This!” is a reprise performance, one of the Fringe Flashbacks of favorite shows that the Cincy Fringe Fest is bringing back for its socially-distanced online performances this year. Storyteller Tommy “Rev Nuge” Nugent assembled the comic narrative following the Occupy Wall Street protests of 2012. Back then, he walked the streets with a sign advertising his own art.

But, as he came to advertise, “A funny thing happened on my way to the revolution. I started to believe in it.”

Funny things comprise Nugent’s rambling narrative of his journey as he describes his absurd, ironic and often deeply poignant observations of life along the way. Oozing with asides and peppered with profanity that earns its R (17 years and older) rating, the tales begin with an introduction to the Rev’s native Detroit, his dreams of one-day performing in the city’s 5000-plus seat Fox Theater, and his pique when Charlie Sheen was tapped to play there.  (“F**k Charlie Sheen,” he says. It’s a theme.)

Rev takes us with him to New York to join the Occupy Wall Street protest, to Central Park where he ended up by mistake, and back to the protest where he hoped his humor would be a “calming influence” but found it was lost in the melee. Along the way, he regales with tales of his various jobs, unemployment, his high school crush, his struggles to pay the bills, his recommitment to his marriage and the friendships fostered with fellow Occupiers.

And, yes, he did start to believe in the Revolution — so much so that he worked for it, helping Mrs. Henry successfully fight Bank of America’s foreclosure on her house and Mr. Gerritt buy back his home after a bank did foreclose.

And then…along came Bruce Springsteen, a special message of hope and a send-off to Charlie Sheen.

The performance is edgy. It’s fun. And even if the material seems at first a bit dated (it’s been nearly nine years since Occupy Wall Street), its sense of protest and spirit of hope is needed right now.

On the night Nugent’s virtual re-run went online for the Cincy Fringe Fest,  a 19-year-old man in Nugent’s native Detroit was shot and killed during protests following the death of George Floyd in Minneapolis.

You can see “Occupy This!” through June 13. Individual show tickets are $11 each. All profits are shared 50/50 with the performances, though for $16 you can purchase a “Love Your Artist” ticket in which the additional amount goes to the performer. All-access passes for the TKTK Fringe Fest shows are available for $200; the pass includes 20 primary shows in the digital lineup and six ticketed special events. Find a full schedule at artswave.org/fringe.