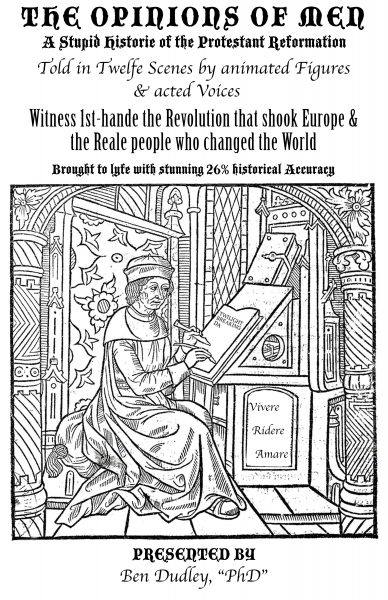 “The Opinions of Men: A stupid look at the Protestant Reformation,” an online animation from the Cincinnati Fringe Fest this year, takes a snicker-and-grin approach to one of the most tumultuous periods in history. It’s…

“The Opinions of Men: A stupid look at the Protestant Reformation,” an online animation from the Cincinnati Fringe Fest this year, takes a snicker-and-grin approach to one of the most tumultuous periods in history. It’s history as you’ve never seen it before.

Produced by Cincinnati’s own Ben Dudley and That Crying Mask and That Laughing Mask Productions, this is what the 16th century might look like it if were memorialized on the Cartoon Channel or, perhaps more accurately, Comedy Central.

In Dudley’s interpretation, the German theologian Dr. Martin Luther — no, not King — takes on the Roman Catholic Church in his 95 theses that challenge church practices of the day. Other characters include Johann Tetzel — no, not the tea but a kind of super-salesman of heavenly indulgences (essentially a free pass into heaven for anyone willing to cough up the cash) to raise money to build St. Peter’s Basilica. Echoes of last year’s international fund-raising effort to rebuild the Cathedral of Notre Dame Cathedral in Paris.

You have France’s Henry II wanting to be BFFs with the Henry VIII on the other side of the English Channel (that flip-flopper who declared to Pope Leo X that “I will always be on your side and won’t just suddenly change my mind when I want a divorce.”) And then there’s the Pope’s scribe, Twittier, who records the Pope’s edicts, reminding him to stay within the character limit.

This is not your father’s history lesson.

As advertised in its title, this is a narrative that flows with the opinions of men — these men who dominated history right up until the advent of humanism and the reign of Queen Elizabeth I. The animation’s title comes from Martin Luther’s quote that “I shall never be a heretic; I may err in dispute, but I do not wish to decide anything finally; on the other hand, I am not bound by the opinions of men.”

Everything changes when QEI comes on the scene and breaks from her royal motto, “I see and keep silent,”

It’s a message of hope. And, with that, I can only express my own: that Ben Dudley will be back for future Fringe Fests with his humor and creativity.