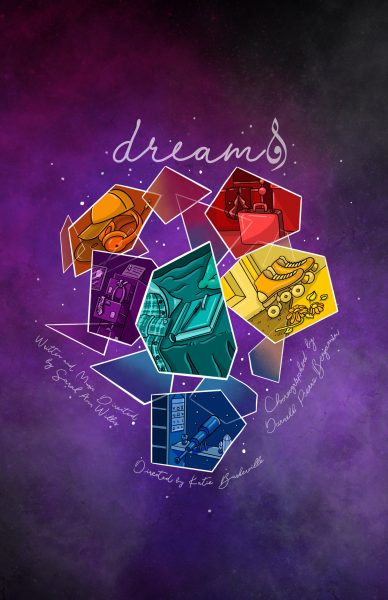 We’re living in a time when human connection — physical, emotional, intellectual — has become, well, everything. During this time of unparalleled social disruption, The Queer Feminists Next Door have delivered us "dream&." A show…

We’re living in a time when human connection — physical, emotional, intellectual — has become, well, everything. During this time of unparalleled social disruption, The Queer Feminists Next Door have delivered us “dream&.” A show that is, ostensibly, about interdimensional emotional support and growth between several queer, non-gender-conforming womxn unsurprisingly hits the spot. If you’re looking to have your mind gently warped and your heartstrings gently tugged, this show delivers.

Based on a therapeutic/guardian angel relationship between Iz and Emma, it’s an unabashedly queer “A Christmas Carol” meets “Inception” meets “Crazy Stupid Love.” Using her unconscious dream state to whisk Emma around to various dimensions in the multiverse, Iz seeks to brighten the gloomy and hopelessly lovelorn lead. With each stop on the dream journey bringing a fresh perspective from new, also-bruised characters, Emma grows (and inspires).

Filmed during the pandemic, the streamed version is pieced together in tiles, with each performer separate. Through good editing and clever lighting, they make the best of it. While this is the new normal for mid-2020, I’d love to see this played out on stage with a real set and real live multi-versed human beings.

The takeaway from the piece, aside from the fact that we are, in fact, living in a multiverse, is that we are all struggling with something. Especially poignant in the era of FOMO, Insta-fame, and social isolation, “dream&” reminds us of the common threads of people, of love, of fulfillment. There’s something to be said for recognizing a fellow lonely heartbroken journal writer sitting on a couch, no matter what their gender identity or sexual orientation.

The big reveal in the end — which I won’t spoil — drives home the premise of finding happiness where you can, starting within.

I look forward to future productions from The Queer Feminists Next door. As they refine their voice and their message, they will be a valuable addition to the Cincinnati arts community.