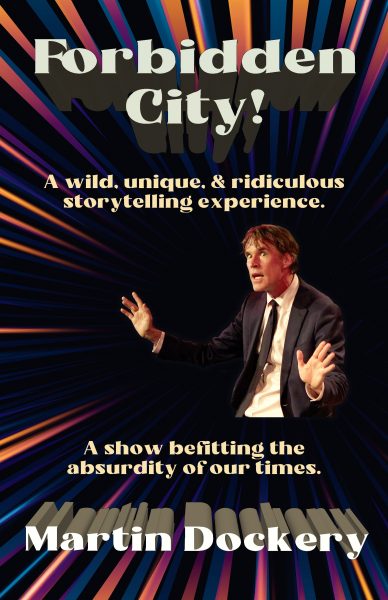 About a third of the way through this hour-long performance, recorded in 2019 and played virtually in this year’s Cincinnati Fringe Festival, I was trying to decide what the word for a monologist was. My…

About a third of the way through this hour-long performance, recorded in 2019 and played virtually in this year’s Cincinnati Fringe Festival, I was trying to decide what the word for a monologist was. My notes say “monologuist?” “monologger?” The reason being I was trying to jot down “Dockery is a hell of a monologist.”

This one man show, in theory about Beijing’s “Forbidden City!,” is about that. And airplanes. And introductions. And doing karaoke in a private tea room. And not insignificantly about audio guides at cultural sites. I also recall a brief jaunt into an untidy explanation of evolution.

Dockery, like any great storyteller, starts to spin his yarn with several threads that make recurring appearances throughout the show. For example, in explaining that plane rides are each made up of some number of movies, he subsequently describes distances in how many movies it would take to get there. It’s one of those clever devices that slips into a description and gets the memory bells clanging in your brain.

“Forbidden City!” is a one man show with no props, aside from a rarely used table and swivel office chair. His rapid delivery, combined with wild, chopping gesticulation turned the banal into vivid visual energy. I jotted down “self-deprecating but cocky?” as a way to describe his humble swagger.

For any monologue to work, the audience has to trust the performer enough to believe their story. With tongue-in-cheek self-criticism from the outset, Dockery begs the audience to lower our expectations, and then delivers a thrilling performance.

At just over an hour, this journey was about half of a movie. I suggest you go on it with him. The primary lineup of this year’s Cincinnati Fringe Festival will be available until June 20, so don’t miss your chance!