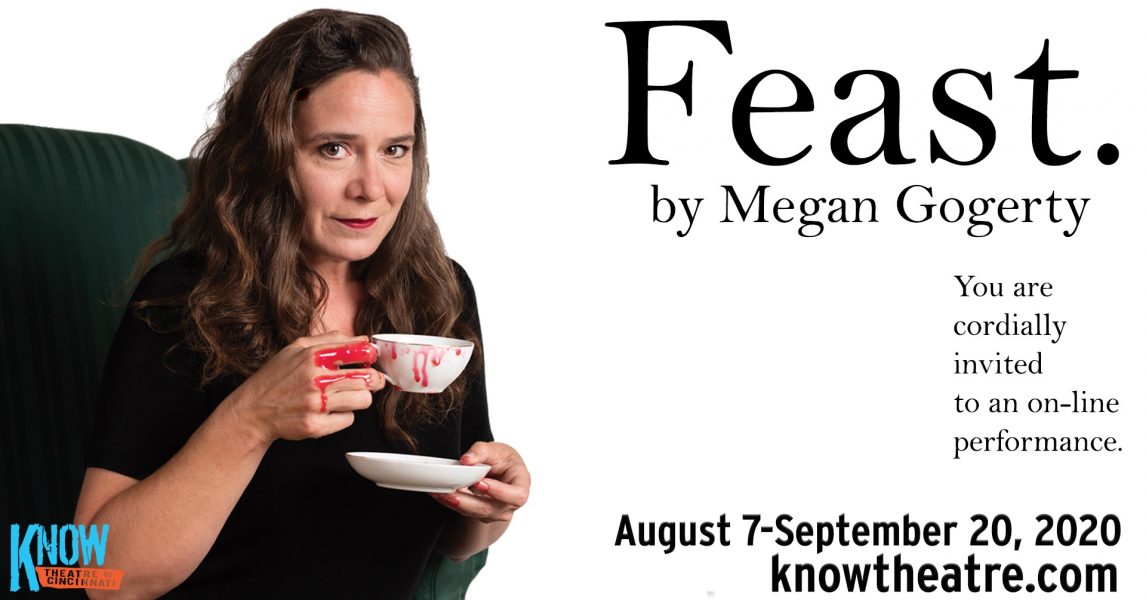 The 2020-21 season of Know Theatre of Cincinnati kicked off this weekend with "Feast." The one-woman show, written by Megan Gogerty, is a uniquely 2020 piece of theater. It was made to be viewed online,…

The 2020-21 season of Know Theatre of Cincinnati kicked off this weekend with “Feast.” The one-woman show, written by Megan Gogerty, is a uniquely 2020 piece of theater. It was made to be viewed online, as so many things are in this strange year. But it takes steps beyond merely recording a performance and releasing into the wilds of the internet. It’s an experience that could not have happened in normal year. As Grendel’s mother (she has a name) reminds us, necessity is the mother of invention. Know Theatre takes that concept to heart.

For example, before the show, I received a package at my doorstep, tied with a ribbon, with a message telling me not to open it until instructed to by my host. The package and its contents were woven into the theatrical experience in first charming then unexpectedly poignant ways. Combined with expertly crafted dialogue, peppered with references to the streaming platform itself, I felt, more than I have in a long time, like I was experiencing theater as it was intended to be seen.

“Feast.” is structured as a sort of virtual dinner party. There’s not much in the way of food, but it’s essentially a pretext that Grendel’s mother uses to get us, the descendants of Beowulf’s people, to listen to her. She’s not after vengeance or blood. But she has grief. She has rage. And she needs to be seen. To be heard. To be felt. Her story is a millennium old, but it strikes remarkably close to home.

Part of that is Gogerty’s exceptional writing. Making a character known for violent rage and humanizing her is no small feat, especially since she doesn’t shy away from gruesome details. But her desperate frustration rings true to anyone who has ever felt powerless. Jennifer Joplin brings that frustration to life with her uncompromising, visceral performance under Tamara Winters’ expert direction.

At its heart, “Feast.” is a cry for justice. After centuries of a quasi-existence fueled by grief and a grudge, Grendel’s mother has despaired of finding peace. She only hopes she can lead her audience to a better way. But it’s possible that, by hearing her story and attending her feast, there could be something her audience can do for her.

“Feast.” is playing online now through September 20. Order tickets a week in advance and spend a few extra dollars to receive a special party favor and the full, interactive experience.