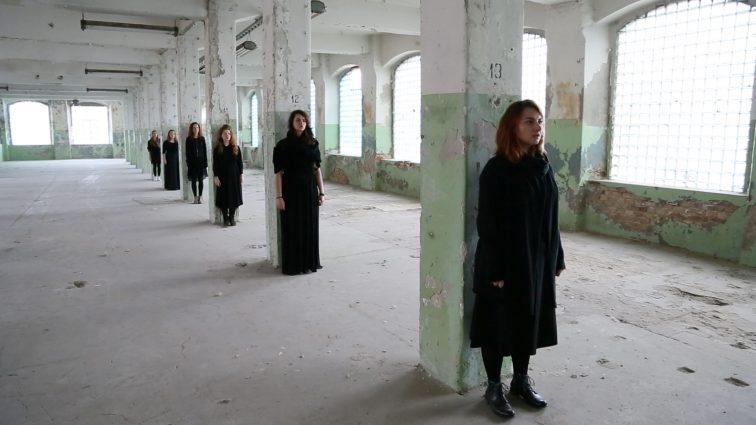 Tania Candiani is a story teller extraordinaire. As an artist, she brings to life the narrative histories of specific sites around the world, telling their stories in sound and visual representations. Cincinnati is one of…

Tania Candiani is a story teller extraordinaire. As an artist, she brings to life the narrative histories of specific sites around the world, telling their stories in sound and visual representations. Cincinnati is one of them.

Her “Cincinnati Project” is now on view at the Contemporary Arts Center, delivering, through sound, video and still displays, a look into the laboriousness of life in the late 19th century and its celebration of the industries that made it that way. It is a metaphorical history, come to life to remind, educate and, at times, appall us with representations from the city’s often forgotten past.

The late 19th century was an era in which local employment was dominated by meat packers, printers, metal foundries and wood shops. These businesses shared downtown streets with tenement apartments where their workers lived. The work was hard, and it was not always the safest or most sanitary. Factories belched fumes into the air. Nevertheless, the time was celebrated as a golden age. It congratulated itself with frequent expos and parades featuring lavish floats that extolled the glories of industrial production.

Candiani, who was born in Mexico City, made many trips to Cincinnati over a two year period to capture the sights, sounds, ambiguities and contradictions of this historical narrative.

Anchoring the exhibition is her film, “Sounding Labor, Silent Bodies,” produced in Cincinnati with a choir of women clad in black who intone, a cappella, the jarring sounds of our city’s ancient industries at work. It is, in Candiani’s own words, a “choreography of labor.” The camera captures the fatigued and often pained expressions of the women’s faces as they mimic the sounds of clanging metal, squealing pigs and bursts of steam.

Look closely and you may notice the dusky outline of Cincinnati’s downtown cityscape through the windows of the whitewashed factory walls where it was filmed. Church steeples come into view as the camera pans the room to reveal the decaying pipes, sinks and floor boards of the abandoned home of an industry. Listen carefully and, behind the cacophony, you may also hear the faint chirping of birds through the warehouse windows.

On the walls of the gallery, you will find a score of sorts for the performance. Sheets of music, adapted to mood and physicality of the film, with lines that at times are faded and fogged like the disappearing memories of that long ago era.

Historical, once brightly colored posters from the city’s industrial expositions of the 1880s accompany “Sounding Labor, Silent Bodies.” A colorful scroll depicts the floats that paraded the city — floats pulled by horses, topped with exotic palm trees, castles, Bedouin tents and costumed characters from stories of conquest throughout history.

Above that scroll, in black and white, is Candiani’s modern interpretation exposing themes that run through her art — the oppression of workers, gender inequality, the break-throughs and failures of technological and economic structures. These, portrayed in black and white cut-outs of floats depicting slavery, strikes and statues being toppled, portray a troubled advertisement of our current time.

This exhibition, organized by guest curator Kate Bonansinga, director of the School of Art at the University of Cincinnati in collaboration with the CAC, runs now through January 17.

Put on your mask. Make an appointment for a timed viewing. Get out of the house, and go!

Admission to the Contemporary Arts Center is free, but during the pandemic, capacity is limited. Visitors must call or go online to make an appointment for the window of time when they wish to attend. Visitors must wear a mask and maintain social distancing. Every two hours, the museum closes the galleries for 15 minutes to clean and sanitize. If you lack a mask, you can purchase one for $1 at the front desk. Visitors with children under 2 and those with medical conditions that make wearing a face mask impossible should call ahead to make arrangements.