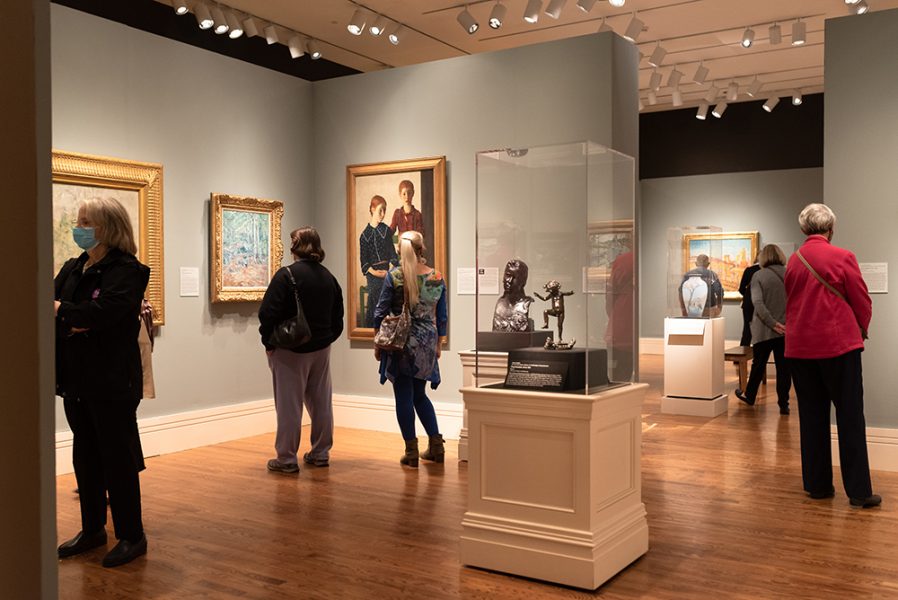 A young woman stares out from the canvas, her head tilted against her right hand and her dark hair falling over her face, nearly obscuring one eye. On closer look, we realize she’s lying on…

A young woman stares out from the canvas, her head tilted against her right hand and her dark hair falling over her face, nearly obscuring one eye. On closer look, we realize she’s lying on her stomach in the grass, her head propped up to face the viewer. The informality of the setting — and the whimsical expression of the sitter — sets this portrait apart from the others in this gallery of more traditional 19th-century portraits.

The sitter is Lilly Martin Spencer. And so is the artist. Her self-portrait, painted in the 1840s when she was only 18, is one of the many unexpected works in “A Splendid Century: Cincinnati Art 1820-1920,” now on view at the Taft Museum of Art. This new exhibition celebrates the 200th anniversary of the historic Taft house with nearly 60 works of art gathered from 31 private collections and 13 museums and institutions.

At the time Spencer was a child, Cincinnati was a booming frontier town of some 10,000 people and a center of trade connecting the Ohio, Miami, and Licking river valleys. The city’s growing prosperity allowed its more affluent residents to build grand homes, showing off their economic wealth and cultural sophistication. One of those stately houses eventually evolved into the Taft Museum of Art.

Martin Baum and Ann Somerville Wallace Baum, a merchant couple, built the core structure. Their home, Belmont Square, was modest compared to the Taft building we know today — essentially four large rooms and a foyer connected by a long hallway — but for Cincinnati in the 1820s, it was grand. In the century that followed, the house was expanded and updated according to the evolving styles and tastes of its different occupants, including Nicholas and Susan Longworth, David Sinton, and Charles Taft and Anna Sinton Taft.

The Taft curators used this chronology of families to organize “A Splendid Century,” focusing on the types of art each occupant commissioned and collected and the artists they supported. In less skilled hands, a strict chronology could have been boring. But the Taft curators broadened the context, presenting stories of what was happening artistically across the nation and the world, not just in Cincinnati. This approach makes for a thoughtful exploration of Cincinnati artists and their relationships to the different art movements from 1820 to 1920.

Many of the Cincinnati artists presented in “A Splendid Century” may already be familiar and loved by Cincinnati audiences. These include Audubon, Duvenek, Farny, Nourse and Thwachtman. But the Taft exhibition also presents lesser-known artists whose names have often been omitted from the standard art history narratives.

Who are these other artists? Many are women and people of color. Here are just a few, including their standout works featured inside the exhibition:

Robert S. Duncanson is best known for his series of eight grand landscape murals painted inside the Taft between 1850 and 1852 when Nicholas and Susan Longworth owned the house. Being an African American artist in pre-Emancipation America had its challenges, but Duncanson successfully overcame many of those obstacles and created a body of work centered on the natural world and the power of the landscape. He traveled to Europe and painted more landscapes, many influenced by the Romantic movement.

Elizabeth Nourse was determined to make a living as a professional painter during a time when women artists were not taken seriously. She moved from Cincinnati to Paris with her sister Louise in 1887. There, Nourse gradually made a name for herself, winning prestigious prizes in competitions and earning respect as an artist. Despite the accolades, her work was largely forgotten after her death. This portrait of a girl is representative of Nourse’s great ability to depict everyday people in non-sentimental ways.

Dixie Selden also fought to be recognized as an artist by the male establishment and was one of the founding members of Cincinnati’s Women’s Art Club in 1892. Selden used Cincinnati as her home base, but traveled extensively. Her work reflects the influences of her travels. Selden painted this scene of fishing boats during one of her European excursions. Her use of bright colors and expressive brushstrokes was influenced by Fauvism.

Rookwood Pottery was one place in Cincinnati where women could find work as artists. Founded by Maria Longworth Nichols Storer, Rookwood became world-famous as a ceramics studio. They often employed immigrant artists with outstanding skills. Kataro Shirayamadani left his native Japan to work at Rookwood where he helped develop an innovative process of glazing ceramics with copper electrodeposit. This particular vase was shown at the 1900 Paris Exposition, where Rookwood Pottery received the Grand Prize.

Recognizing that life wasn’t so easy for everyone during the “splendid century,” the curators created a series of labels titled “More to the Story” which supplement the standard label copy presented throughout the exhibition. “More to the Story” dives into the social issues related to the works on display — including the struggles of women, African Americans, Native Americans and laborers — and adds a greater level of depth of interpretation by placing those works within the greater social and cultural contexts of the time.

Additionally, the “Take a Closer Look” audio guide gives viewers a more interactive exhibition experience. Accessed by cell phone, the guide prompts visitors to take a closer look at selected works of art with a series of questions. Each question encourages viewers to engage with those works. An example includes the rare Audubon portrait of Barbara Fontaine Cosby Todd (1819). Here, the audio guide asks the questions “Which details do you see in this portrait?” and “If someone was painting a portrait of you, which details would you like to see depicted?” These are fairly simple questions, but good entry points for those not familiar with the basics.

Complementing “A Splendid Century” is a second exhibition titled “Built to Last: The Taft Historic House at 200.” This exhibition begins in the Sinton Gallery, then guides visitors throughout the museum, presenting information about the different styles, additions and restorations that were done to the house (now museum) over time.

To maintain the museum’s aging structure and further protect its collections, the Taft will start a major renovation in 2021. Titled the “Bicentennial Infrastructure Project,” the overhaul is largely funded by two federal grants awarded this past year: $750,000 from the National Endowment for the Humanities and $500,000 from the National Park Service. These monies will help ensure that the Taft Museum of Art — and all its connections to Cincinnati’s cultural past and present — will thrive for another 200 years.

Franck Mercurio is an independent curator, exhibition consultant, and writer/editor based in Cincinnati and Chicago. In his free time, Franck likes to geek-out by exploring used bookstores, visiting museums, making art, and watching pro baseball (even when stands are empty!) You can learn more at Mercurio-Exhibits.com.