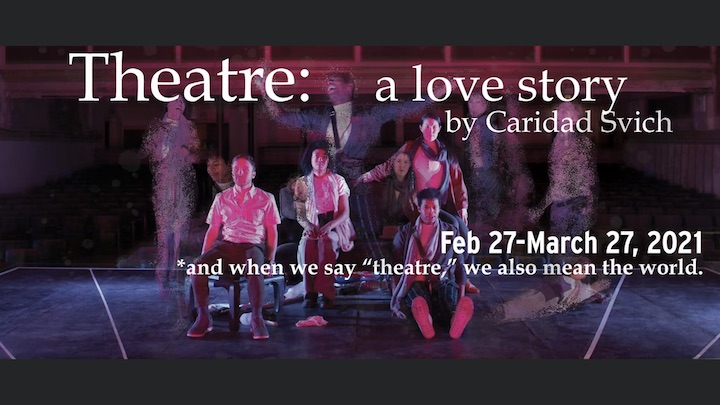 'Theatre: A Love Story' reflects on storytelling and value

When I tuned in to the livestream of "Theatre: A Love Story," I saw a video already in progress. It was a virtual walk through Over-the-Rhine, passing familiar landmarks that I used to see far…

When I tuned in to the livestream of “Theatre: A Love Story,” I saw a video already in progress. It was a virtual walk through Over-the-Rhine, passing familiar landmarks that I used to see far more often just under a year ago, before the global pandemic. By the 8 p.m. showtime, the tour concluded at the doors of Know Theatre of Cincinnati, where the production takes place. That’s true on two levels. The production is hosted at Know Theatre, but it also begins with Elizabeth Molloy speaking directly to the audience, telling us, among other things, that the theater on this day, at this time, also serves as the setting.

“This is a play,” she says, “but it may not always feel like a play.” Her introduction, which she also assures us is scripted (by playwright Caridad Svich), serves as a guidepost to orient the audience toward what we’re about to experience. That’s a technique I’m fond of. When a production is going to bend and break many of the conventions of theater, giving the audience a heads up on where they’re heads should be is a kindness.

“Theatre: A Love Story” is challenging to summarize. It progresses like a collective stream-of-consciousness. To begin, Elizabeth Molloy is alone on stage with a projected image of a pristine white room behind her. “It speaks of money,” as she describes it. It’s an early indication of one of the deeper layers of the show — a meditation on the concept of value.

Molloy is not alone for long. A.J. Baldwin enters, at first as an almost other-wordly projected apparition. The two of them sit by a fire in the ruins of a theater and reflect on the origin of performance as a method of storytelling. They wonder about the value of sharing stories. They wonder what value is, and hint that monetary value was at the heart of the calamity that caused society to collapse.

Over time, two more join them — Nathan Tibbs and Montez O. Jenkins-Copeland — and they tell stories. They’re mostly abstract, but they revolve around value, love and loss. Musical interludes see the four of them (as well as dancers from Pones) express those themes through movement, via choreography by Kim Popa. The dance segments are compelling, particularly in their juxtaposition. For example, in a stroke of optimism that is strongly implied to be exploitable and complacent, the characters decide to clean up the ruins. They do so with jerky, robotic movements, intentionally lacking natural fluidity.

Maybe the most moving part of “Theatre: A Love Story” is when the four talk about (or more accurately, around) the experience of making theater. It’s a lament for bygone days of putting together a small production for a small group of friends to see what works and what doesn’t. They talk about singing a song that’s a little pitchy, but it doesn’t matter. Then they sing. And it’s a little pitchy, but it doesn’t matter. Or rather, it does matter, because that’s the whole point of it. Repeated throughout the song is the phrase, “Even then I will see you again.”

The lines between the play and reality are paper thin. Those of us who see the value in theater still, for the most part, desperately miss the in-person experience. The pandemic that has robbed us of the experience is not “Days of Fire,” but it can certainly feel apocalyptic at times. Maybe “Theatre: A Love Story” can best be viewed as a wake-up call and warning. We’ve lost a lot over the last year, but we can lose so much more — permanently — if we don’t reevaluate what value means.

“Theatre: A Love Story” runs through March 14 as a true livestream with recorded footage intercut throughout. On demand recordings of the play will be available through March 27.