Gotta catch 'em all? Go to Pyramid Hill in Hamilton

Sixty-two Pokéstops, seven gyms, 100 characters. Pokémon GO players looking to jump as many as five levels in a single outing should head to Pyramid Hill Sculpture Park and Museum. The Hamilton venue seems to…

Pokémon GO players looking to jump as many as five levels in a single outing should head to Pyramid Hill Sculpture Park and Museum. The Hamilton venue seems to have the largest collection of Pokéstops in Ohio.

When the first Poké-players wandered into Pyramid Hill on a Monday afternoon a few weeks ago, glued to their phones and asking about about gyms and Pokéstops and Pokémon, Pyramid Hill Director of Programming and Administration Jeni Barton — like so many of us — had no idea what they were talking about. But she knew she needed to figure it out: the people asking were much younger than the usual Monday visitors and represented about of the park’s visitors that afternoon.

Barton downloaded Pokémon GO and started playing. Then, she directed another employee to do the same and catalog every Pokémon asset in the park and museum.

“We realized it was a wonderful opportunity to engage a whole new demographic with the park,” Barton said. 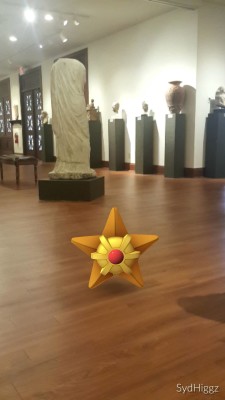 Nearly every sculpture at Pyramid Hill is a Pokéstop, as well as spots inside the museum. Even better, Barton said, every Pokéstop gives a picture of the sculpture, a description and title of the piece, and the name of the artist.

“It’s almost like an interactive map,” Barton said. “We have an app, but this has taken that concept and made it fun.”

It’s also given Pyramid Hill another selling point. Park admission, $8 for adults and $3 for children, seems like a deal for serious Pokémon players.

Attendance is up 18 percent since Pokémon GO launched, Barton said. Many of the new visitors are young adults, while the typical Pyramid Hill visitor tends to be older.