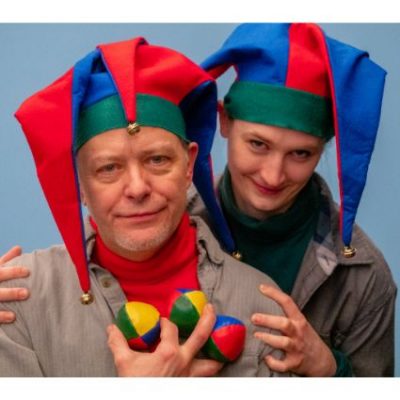 Finally, someone to suffer the fools for you…gladly (mostly).

After successfully suffering fools for others, two SUFFER Fools take one hit too many and lose their shit. A modern, misanthropic tale told through satire and clowning featuring puppets, pantomime, juggling, music and swearing! Brought to you by the creative team behind Fringe favorites: Home, Boo-boo and Pulling Off Procreation.

HOMEGROWN Theater is a small and screwy Cincinnati Theater company intent on bringing our own brand of in-your-face weirdness and enjoyable offensiveness to the stage. Created as a vehicle for the 2012 Cincy Fringe production of The Doppelgänger Cometh and Overtaketh, Homegrown has participated in every Cincinnati Fringe Festival for the past eight years. Headed by founder Leah Strasser, Homegrown works with local artists each year to produce new festival productions.