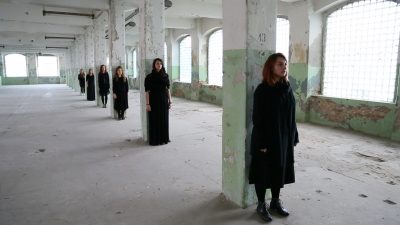 Cincinnati Project is a solo exhibition by Mexico City-based artist Tania Candiani (b. 1974) that reimagines the Cincinnati Industrial Expositions that took place between 1870 and 1888.

Candiani investigates site and history for each exhibition she creates. For Cincinnati Project, Candiani is producing at least three new, commissioned works that, alongside several historical prints, embody her archival research on labor, utopianism and perceived progress in Cincinnati in the late 19th century.

Industrial and World Expositions occurred around the globe between the mid-19th and early 20th centuries. They championed utopian visions for the future, staging specific countries and industries in a positive light by highlighting both scientific innovation as well as commercial and cultural exchange. Cincinnati’s Music Hall was built specifically for the purpose of hosting the future-oriented displays of the Cincinnati Industrial Expositions. Each exposition began with a parade between Music Hall and Cincinnati’s downtown business district. Candiani, with the help of the CAC and students from the University of Cincinnati, is producing an abstract representation of a float that would have traveled this route. Sound is also an important component of each of Candiani’s site investigations. As a further expression of her research, Candiani is creating a musical score for a local choir that references the sounds of19th century industrial equipment; documentation of the choir’s performance is a cornerstone of the exhibition. Candiani, with Luis Filipe Ortega, represented the country of Mexico in the 56th Venice Biennale in 2015. Since 2012 she has been a fellow of the National System of Art Creators in Mexico. In 2011 she earned a Guggenheim Fellowship for the Arts, and in 2018 she earned a Smithsonian Artist Research Fellowship; during this time she conducted much of the research for Cincinnati Project.

Curated by Kate Bonansinga, Director, School of Art in the College of Design, Architecture, Art, and Planning