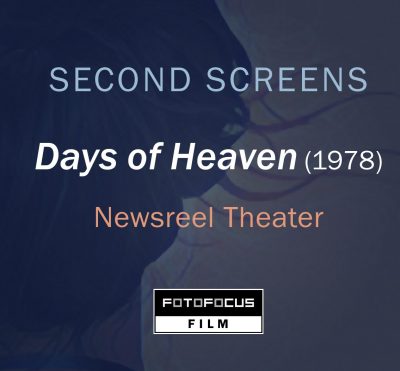 SECOND SCREENS is a free monthly film series presented by FotoFocus across Greater Cincinnati and Northern Kentucky every second Tuesday in 2020. No tickets required. Free and Open to the Public.

With a career spanning over fifty years, FotoFocus is excited to re-examine Terrence Malick’s second feature film, Days of Heaven (1978). This period film, set in 1916 in the Texas panhandle explores the tumultuous relationship between a farmer and two of his workers. The film, starring Sam Shephard, Brooke Adams, Richard Gere, and Linda Manz is set against the golden landscape of a forgotten time. With music by Ennio Morricone, and cinematography by Néstor Almendros and Haskell Wexler, Days of Heaven is a modern masterpiece worth rediscovery by younger generations.

– – – – – – –
SECOND SCREENS is a new free monthly film series presented by FotoFocus across Greater Cincinnati and Northern Kentucky every second Tuesday in 2020. No tickets required

The aim of SECOND SCREENS is to enrich the cinematic landscape through public screenings of works that span many years, subjects, and genres, including narrative, documentary, avant-garde, and animation