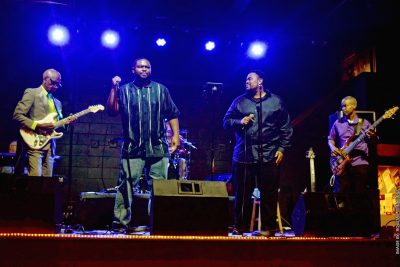 Push Play at Wednesdays on the Porch

Wednesdays in the Woods has moved online!

Given the Governor’s directives limiting gatherings due to COVID-19, CCAC will host the remainder of Season 12’s summer concert series via live streaming shows online at Facebook.com/CliftonCAC, this week featuring the musical stylings of Push Play. We encourage everyone to tune in and enjoy from the safety of their own porches, patios, yards and balconies.

About the Band: Push Play
Music should be fun, and make you not only tap your feet, but get up out of your seat: this is the mantra of the band Push Play, founded in 2014. Featuring Derexter Davis (Singer), Justin Jones (Singer), Patrick Conway (Keyboards), Marvin “Ohge” Coleman (Guitar), Randy Calloway (Drums), and Darrell Calloway (Bass), Push Play’s set list spans from the 70’s to present day, and includes music from the Temptations, Stevie Wonder, and Michael Jackson to Hall and Oates, Justin Timberlake, Maroon 5, and Bruno Mars. When you Push Play, the house is going to rock!