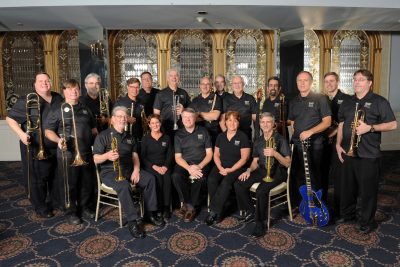 Sound Body Jazz Orchestra at Wednesdays on the Por...

Wednesdays in the Woods has moved online!
Given the Governor’s directives limiting gatherings due to COVID-19, CCAC will host the remainder of Season 12’s summer concert series via live streaming shows online at Facebook.com/CliftonCAC, this week featuring the musical stylings of Sound Body Jazz Orchestra. We encourage everyone to tune in and enjoy from the safety of their own porches, patios, yards and balconies.

About the Band: Sound Body Jazz Orchestra
Formed in 1992 as a collaboration of Cincinnati, Ohio’s, Roger Bacon High School Band Alumni, Sound Body has received tremendous response to its eclectic combination of classic big band swing with contemporary jazz and fusion. The band’s name, adapted from the high school’s Latin motto, “Mens Sana en Corpore Sano” (A Sound Mind in a Sound Body), is quite appropriate, given the powerhouse ensemble work that is the trademark of the 18-piece group.

The jazz orchestra is an original American art form that combines the sheer joy and freedom of jazz rhythms with a rich and powerful orchestral sound. Following in the tradition of the famous jazz orchestras of the 1930s and 40s (commonly known as “big bands”), Sound Body plays an eclectic mix of styles – from classic swing to hard-driving Latin, to lush ballads. But what makes this ensemble unique is the addition of contemporary jazz and fusion tunes from the 1970s to today. The common thread of this broad repertoire: it’s all great dance music!