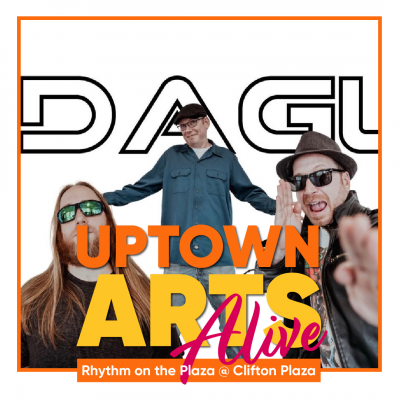 DAGLIO at Rhythm on the Plaza

Uptown Cincinnati comes to life this summer with Uptown Arts Alive, free outdoor performances, six days a week designed to enliven our neighborhoods and bring people together through art! Happening in each of the 5 neighborhoods of Uptown, these 66 unique events will feature bands, musicians, actors, puppeteers, DJs, dancers, and performers of all types.

Daglio is a 6 piece Rock en Español/Latin Rock band from Cincinnati. Originally started as a solo project by Alberto Daglio, who is a Salvadoran / American singer / songwriter that stood out with his band Ultravioleta and various other projects as a soloist during the years 2004-2010 in El Salvador. He defines himself as a “direct descendant of pop rock that was made in the 80’s and 90’s in Latin America”, son of the MTV Latino era, in fact, some of his greatest influences have always been artists and bands of the caliber of Soda Stereo, Fobia, La Ley, Jorge Drexler.

Among his greatest hits with the band we can find “Regresas otra vez” and “Radio”, which achieved # 1 position on Radio Femenina (El Salvador). The Salvadoran / American artist is also a composer and producer of songs such as: “Un Poco de Felicidad” created for a Coca-Cola spot in 2008, in which several Salvadoran artists also collaborate. In the same year, in addition, he performed the music for a summer TV spot for Cerveza Pilsener.

Paid parking is available behind Clifton Plaza in the Clifton Merchants Lot. Access is from Howell Avenue.